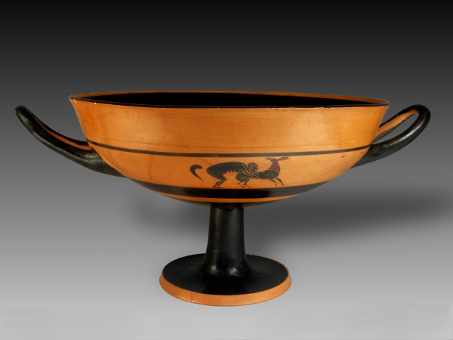 Description:
This is a wonderful cup by a well known painter, with marvellous scenes. Side A: an ithyphallic satyr grabs a deer from behind with both hands. Side B: a satyr copulating with a deer.

An especially interesting parallel for our cup, created by the same painter, can be found in the Metropolitan Museum of Art, New York, where an ithyphallic satyr is approaching a mule from behind with sexual intentions. Even closer is a skyphos in Athens, where a deer is sexually assaulted by a satyr.

The Oakeshott painter (formerly known as the Painter of the New York Band Cup) received his name from Beazley, who renamed him in honour of Sir Walter and his wife Noel Oakeshott, when they donated a cup by the painter to the Ashmolean Museum Oxford; this cup (inv. nr. 1972.162) has become the name-piece of the painter.

Condition:
Complete, reassembled with no new material. On side B is an stained area, which has occurred prior to the firing of the cup.