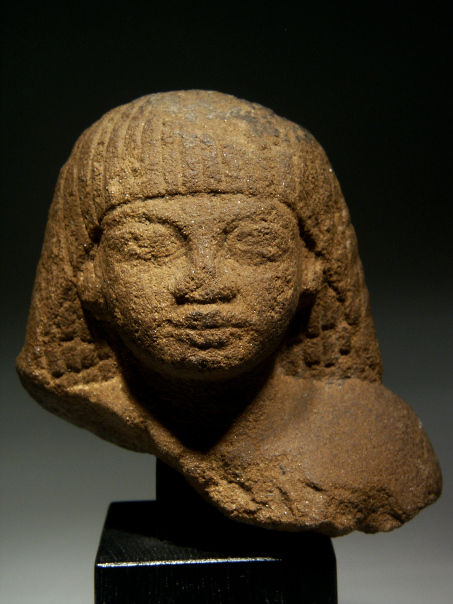 Description:
This is a bust of a man, most likely a high official, who lived in the 18th dynasty, more specifically during the reign of pharaoh Amenhotep III (circa 1388-1350 B.C.) or possibly shortly after.

The man is depicted wearing a layered or double wig (also called bipartite wig) which is a good criterion for dating the bust. These wigs were very popular, almost used as a rule, during the reign of Amenhotep III (Kozloff, p. 216-218).

The bust is made of quartzite (a metamorphic rock, formed of what originally was sandstone). The Egyptians used to call this material biat (biA.t), meaning "wonderful stone" (Hannig, p. 246b). Amenhotep III had a strong preference for quartzite. On a stela, found behind the so-called Colossi of Memnon in his mortuary temple, the king speaks about the monuments which he made out of this material, coming from the "mountain of quartzite" (Urk. IV, 1672, 17). Many statues from the temple, including the colossi, are indeed made of quartzite. The king appointed the architect and high official Amenhotep, the son of Hapu, as overseer of the work of quarrying quartzite. This man is often depicted as a scribe, sitting with his legs crossed and holding a papyrus on his lap, on which he is writing. In the text on one of those papyri (Egyptian Museum Cairo, inv. JE 44861, Kozloff p. 212-213) he tells us: "The king appointed me as overseer of the works in the mountain of quartzite" (Urk. IV, 1833, 1). For more information of the use of quartzite during the reign of Amenhotep III see Kozloff, p. 113-116, who remarks that the Egyptian sculptors have never shown their abilities as artists better than when they were working with quartzite.

Maurice Nahman (1868-1948) was a collector and dealer of antiquities. He was the head cashier at the bank of Crédit Foncier d'Égypte in Cairo and also became one of the principal Egyptian antiquities dealers. Jean Capart called him "the most important dealer of Egyptian antiquities in the world" and "a top-class antiquities dealer". He had a large gallery attached to his Arabic style house (or rather a small palace) in Cairo. Nahman supplied many quality objects to international museums and private collections; the database of the British Museum alone lists almost 600 objects as coming from him. For at least half a century he handled so many antiquities that his expertise was enormous.

Nahman held several sales during his lifetime: one in his house in 1920, another at Christie's in London on 2 March 1937. He died in March 1948, after which his estate was sold at auction at the Hôtel Drouot in Paris in February and June 1953. Christie's London sold more objects from Nahman in a sale on 28 April 2004 (see their catalogue, p. 48-49, for photographs of Nahman and his house).

Condition:
Fragment of a larger statuette; tip of the nose missing; some surface wear and staining as visible on the photographs; on the back of the proper left shoulder remains of an old inventory number written in white; mounted.