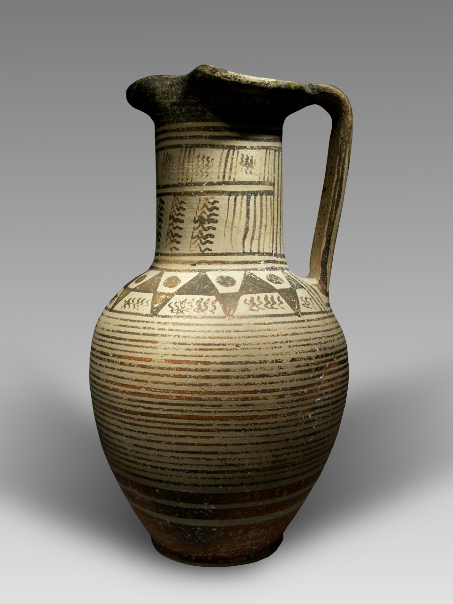 Description:
This is an early oinochoe (wine jug), dating to about 720 B.C. and of western Greek origin. The body of the vessel is decorated with a series of horizontal stripes. On the shoulder is a frieze, consisting of two registers; the upper register is filled with an series of triangles, pointing upward, alternating with circles or dots; the lower register contains another series of triangles, this time pointing downward, and zigzag lines. The neck also shows two registers, framed by several horizontal stripes, and each containing zigzag lines and groups of vertical lines. On the handle seven vertical stripes. The outside of the mouthpiece is black.

Literature:
For the shape of the oinochoe and its decoration with horizontal stripes compare John Boardman, Early Greek Vase Painting, 11th - 6th Centuries BC. A Handbook (London, Thames and Hudson, 1998), fig. 114 and 119; J.N. Coldstream, Greek Geometric Pottery. A Survey of Ten Local Styles and their Chronology (Methuen’s Handbooks of Archaeology) (London, Methuen, 1968), pls. 19 b-c (Corinthian) and 36a (Naxian). For the decoration with triangles pointing in opposite directions see for example a (differently shaped) vessel from Crete, Coldstream, o.c. pl. 53g; for the decoration in general compare Boardman, o.c. fig. 113.

Condition:
The black varnish on the base has a red-brown colour, which was caused by irregular conditions during the firing of the oinochoe; paint slightly worn in places as visible on the photographs; slightly sintered; a professional repair to a small part of the mouth, hardly visible; handle may have been reattached, but if so it was done in a very professional way, it is impossible to be certain about this; some encrustation, unimportant scratches and pitting as is customary on ancient vases; else intact. A fantastic object.