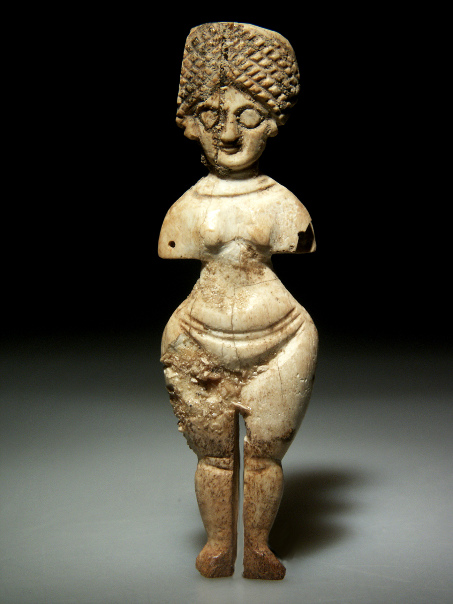 Description:
This is a small but very interesting bone female doll, dating from Roman times, depicting a standing nude figure. She is waisted and has broad hips. Parts of her body are rendered by incised lines, as were her eyes and mouth and especially her hair, elaborately arranged in a high style. The reverse of the upper body is unworked.

The shoulders are pierced for the attachment of separately made arms (now missing, as is usually the case with dolls with articulated arms); these were slipped into notches in the upper arms just below the shoulders, and attached by wires. This is a more labour-intensive and therefore less common method of attaching the arms, but other dolls in this style are known, such as a Graeco-Parthian doll in the Museum of the University of Pennsylvania (Elderkin, p. 475-476 als fig. 26A-B on p. 474); see also the illustration in Manson (1987), p. 17, last row, second from the right.

Many bone dolls lack detailing, but this example is a positive exception. Even though it was repaired and the arms are missing it is a most interesting specimen.

Background information:
Dolls were fashioned from various materials in antiquity; wood, terracotta, bone and ivory were commonly used. Many of the dolls were jointed, that is to say that their arms and/or legs were made separately, so that these were moveable. Jointed dolls from Egypt, both of pottery and wood, date back to the third millennium BC. A doll dating from the third century BC in the Metropolitan Museum of Art, New York (inv. 11.212.43) may belong to the earliest dolls made of bone.

It has been stated that dolls and the remains of dolls constitute one of the largest bodies of evidence for toys and games to survive from Roman antiquity. Manson’s analysis (1987) mentions a total of 493 Roman dolls, the majority of which dates to the 1st to 3rd centuries CE.

However, the question whether or not these figurines were dolls, meant to be children’s toys, or votive offerings, perhaps in some cases also connected to magical practices, has been and still is being discussed among scholars.

Condition:
Repaired; some of the glue used seems to have been in contact with the ground, as a result of which some earth and very small pieces of stone are glued to the doll; part of the proper right foot missing; part of the back of the head on the right hand side missing, also affecting that side of the coiffure; small piece missing of the notch in the left shoulder; some encrustation. But is spite of all this still a very attractive piece.