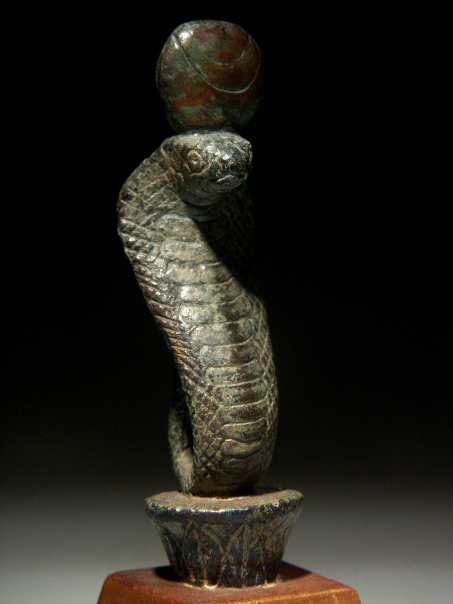 Description:
A well provenanced and beautifully executed bronze statuette of a cobra. The animal is depicted surmounting the top of a papyrus column and wearing a sun-disc on its head, which indicates that this is not just a cobra but a divine being, comparable to the uraeus which protected the pharaoh. The papyrus (wadj in Egyptian) often accompanies the snake as an emblem, in most cases indicating that she is the goddess Wadjet, the protective deity of Lower Egypt. Great care has been taken to decorate the body with exceptionally detailed markings.

Literature:
For the meaning of the cobra in ancient Egypt see Sally B. Johnson, The Cobra Goddess of Ancient Egypt. Predynastic, Early Dynastic and Old Kingdom Periods (London, New York, Kegan Paul, 1990), p. 5-11; for depictions of the animal on a papyrus see p. 202, and many figs. on p. 217-233.

Provenance:
Dutch private collection; before European private collection from the late 1950s onwards; before collection of Wilhelm Horn (1870-1959), acquired in 1931 from Dr. Hartmann, Cairo. Wilhelm Horn was a banker from Berlin who travelled to Egypt several times between 1926 and 1938, where he bought many objects for his collection. He had ties with the archaeological and antiquities communities.

Condition:
Intact, in very good condition overall; some encrustation, very minor pitting and other surface wear as visible on the photographs. Mounted on a wooden base. A highly desirable bronze!