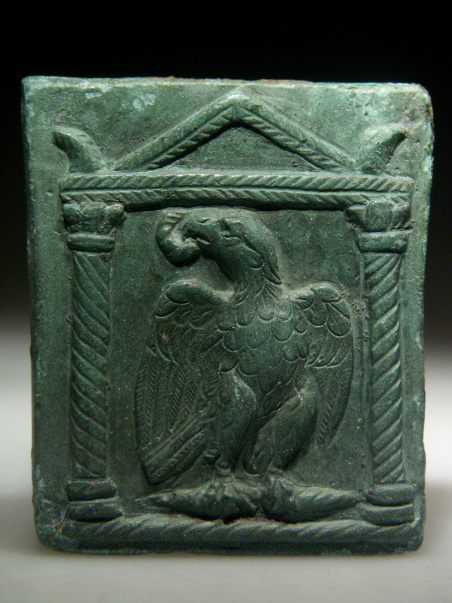 Description:
This is a highly desirable Roman bronze plaque, depicting an eagle within a small building or aedicula, which has two spirally fluted columns with Corinthian capitals and foliate akroteria, plus a gabled roof of which the pediment with its cornice moulding and tympanum are visible. The eagle, which represents the god Zeus / Jupiter, has its wings slightly raised and its head turned to its right. It has a laurel wreath in its beak and is standing on a lightning bolt.

The elements of the scene, such as the aedicula, the type of column and the presence of the eagle with laurel wreath and lightning bolt, make it possible to date the plaque rather precisely. It dates from the mid second century C.E., during the reign of the co-emperors Marcus Aurelius (A.D. 121-180) and Lucius Verus (A.D. 130-169).

The function of the plaque is unclear; several suggestions have been put forward, such as a furniture or box fitting, a weight, a votive gift or a matrix for making sheet gold and silver votives. For a treatment of the latter see Michail Yu Treister, "Bronze Matrices from the George Ortiz Collection" in Adriana Calinescu (ed.), Ancient Jewelry and Archaeology. Proceedings of the International Symposium Dedicated to the Memory of Burton Y. Berry, Bloomington, September 1991 (Bloomington, Indiana University Press, 1996), p. 172-184.

A couple of years ago the object was technically investigated, not because of authenticity doubts but to add the composition spectra of the plaque to a database of authentic objects. These tests were completely non-destructive, using the Raman spectroscopic technique for the surface, and neutron diffraction for the bulk study. During this investigation no indications of forgery were found; the elemental composition (bronze and lead) is typically Roman and consistent with what is known from other objects from the same period. In addition the presence of malachite was shown. The tests confirmed the authenticity of the object.

Although relatively small in size, such bronze plaques are highly collectable, provided that they are of high quality. This very same plaque was offered at auction by Christie’s New York in 1998 with an estimate of up to US$ 5,000 (then € 4,600) plus buyer’s premium. Another, comparable but smaller bronze plaque, depicting the goddess Fortuna in a small temple, was sold by Cahn Basel (Auktion 5, Kunstwerke der Antike, 23 September 2005, lot 85) in a lot together with an unimportant oil lamp, for CHF 15,210 (then € 10,000).

Condition:
Intact some normal surface wear, a few small scratches and some minor encrustation as shown; the decorated side of the plaque seems to have been cleaned in the past to bring out the scene better; the plaque is slightly bent, which may or may not have been the original shape. Overall in excellent condition and highly desirable! Comes with a custom made stand.