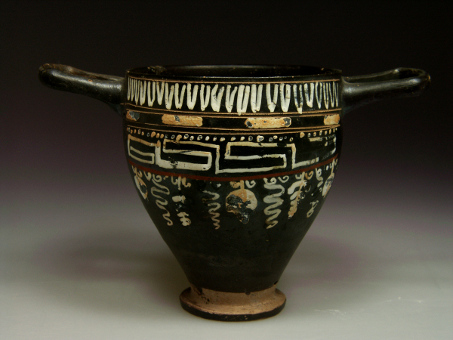 Description:
This is a delightful black-glazed pottery skyphos from the south Italian region of Apulia. The body has a polychrome decoration in white, purple-red and golden yellow, applied over a ground covered by black varnish. There are bands with a so-called egg pattern on the rim between the handles. Below this on one side a band of meanders between a row of dots and a red line, followed by a series of ivy and grapes. The other side shows dotted rosettes and ivy garlands.

The decoration is typical for pottery which is commonly called Gnathian, after the name of present-day Egnazia (located on the Adriatic coast of Apulia). In the middle of the nineteenth century large quantities of pottery with this type of decoration were found during excavations of the cemeteries of Egnazia (and nearby Fasano). Ever since they were known as the pottery of Egnazia, or Gnathia pottery, even though little of it was in fact made at Egnazia.

Provenance:
Dutch private collection; before collection of Dr. Angelo R. Bergamo, New Jersey; Harmer Rooke Galleries, New York; apparently before also with Sotheby’s, since the skyphos contains a Sotheby’s label (reading "Sotheby’s Arcade Auctions, 665/3"; the Arcade Auctions were introduced in 1981), but this label is without a date so it is not possible to verify this.

Condition:
Intact, with some minor wear and paint loss, some minuscule chips to rim ad foot and some of the usual wear, minor scratches and other damage to the surface, all as shown on the photographs.