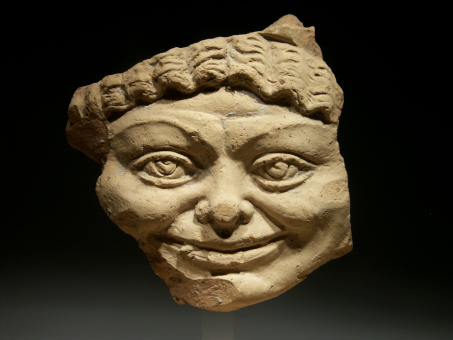 Description:
A splendid face of Medusa, with a broad smile to the mouth and pronounced dimples. Her round face is framed by fine wavy locks of hair. She has a short nose with large nostrils between protruding cheeks, with deep nasolabial folds. The large eyes have incised pupils and irises.

This fragment was probably part of the frieze of a building, or alternatively part of a Campana relief or of an antefix.

The depiction of the goddess is intentionally ugly. She was one of the Gorgons, terrifying female creatures, like her sisters, Stheno and Euryale. Medusa was the only one of them who was not immortal (she was killed by Perseus). She had a frightening, petrifying gaze, and because of this a Gorgoneion (a depiction of the grotesque face) was often used as protection for buildings and objects, being placed on walls, doors and tombstones, as well as on ships, shields, breastplates and elsewhere, protecting against evil and the evil eye.

Dating:
First half of the first century C.E.

Condition:
Fragment with some damage as shown; no restoration or repairs; some traces of colour; labels with old inventory / auction numbers on the reverse side; mounted on a custom stand.