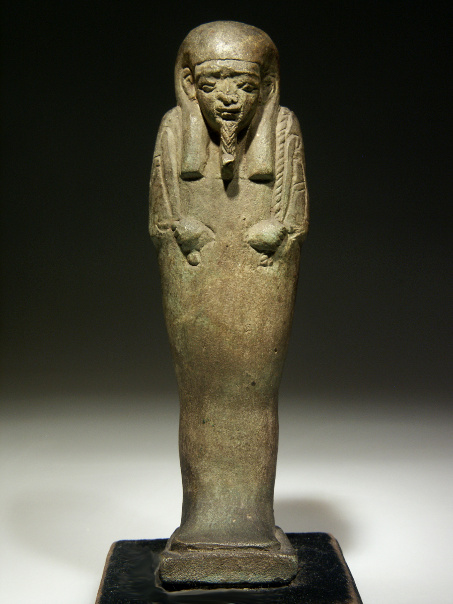 Description:
A green glazed composition shabti, mummiform, for a man called Padipepet, the son of Padiptah and Bastetiridis, with details added in relief. His expressive face is well modelled, rather oval, and has almond shaped eyes, fleshy cheeks and thick lips which seem being pushed forward a bit. The face is surrounded by a plain lappet wig, leaving the ears visible, and a plaited beard is attached to the chin. His arms appear crossed on the chest and the parallel clenched hands, protruding from a shroud, are holding an incised pick, a hoe and the string of a seed-basket which hangs over his proper left shoulder. The back pillar is inscribed with two columns of deep, well executed hieroglyphs. There is a plinth beneath the feet.

The text reads: "O this ushabti, if the Osiris Padipepet, born to Bastetiridis, is asked, you shall say: Here (I am), true of voice." This is the so-called short version of spell 6 of the Book of the Dead.

Padipepet lived in the 26th dynasty, probably in the period between pharaohs Nekau II (610-595 B.C.) and Apries (589-570 B.C.). His tomb was discovered in 1893 in Sakkara, west of the pyramid of Teti and east of that of Weserkaf. Soon after, his shabtis were officially sold to tourists at the Bulaq Museum (the predecessor of the current Egyptian Museum in Cairo). As a result, shabtis for Padipepet can be found in several major museums as well as in private collections all over the world.

One shabti for Padipep was sold by Nagel Auktionen on 27 May 2008 as part of lot 3425 (together with a miniature statuette of a scribe that was described in the catalogue as possibly not ancient), for € 8000 + buyer's premium!

Parallels:
For other shabtis of Padipepet see the work by Janes, cited above. See also www.shabticollections.com, SC115. Another one is in the British Museum, see also here and here.

Condition:
Some discoloration: the faience has darkened, some encrustation, surface wear and pitting; a small chip to the nose; miniscule hairline near one of the hieroglyps on the back (ca 4 mm long, shallow an stable and hardly visible to the naked eye); a miniscule spot on the back of the wig (ca 1 mm) that is possibly a drop of glue. Attached to a velvet covered base from an old collection. Fantastic and very clear hieroglyphs!