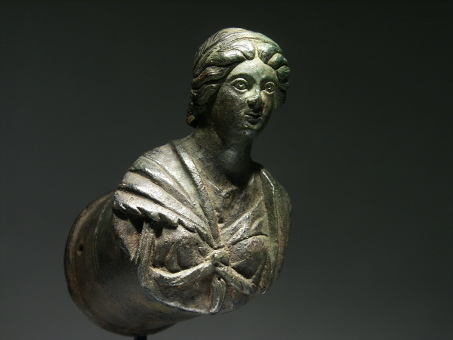 Description:
This is a spectacular and heavy bronze, consisting of a cylindrical section (the end cap of a pole), which is decorated with the bust of a goddess. What a magnificent face she has!

The cylindrical part served as a finial, once adorning the end of a chariot pole as a cap. After the pole was inserted into the bronze, this was secured by a pin which was pushed through the holes on either side of the object and a corresponding hole in the pole.

Complete examples including the (rectangular or round) attachment part on the back side are rare.

For other finials see the book by Menzel mentioned below. For yet another one, decorated with a triton and with a round attachment see the British Museum, inv. GR 1896.5-418.8, BM Cat Bronzes 2696. For an ancient model of a biga (two-horse chariot) showing how such a finial was attached to the pole see BM 1894.10-30.1, BM Cat Bronzes 2695.

The goddess on our finial has a splendidly rendered, round face with a small mouth and slightly parted lips, a short nose, and large eyes, the irises indicated in relief and the pupils drilled. Her long hair is combed back into a chignon, kept in place by means of a hair band.

She has been identified by the previous owner as the youthful Isis, because of the fringed shawl she is wearing and which is knotted between her breasts in a way resembling the familiar Isis knot (known from amulets and protective decorations). Although this identification is not completely certain, it should be pointed out that the head of the goddess was once adorned with what was probably a crown (now missing), as can be seen from the remains of a pin on top of her head. The traces of this are consistent with the shape of the Isis crown (the horns of a cow, joined in the middle where they are fastened to the head).

Perhaps the identification of the goddess will never be completely certain, but what is more important is the fact that she is so beautiful and has such a strong presence! An important and very rare artefact with an absolutely magnificent portrait!

Condition:
Very minor pitting and scratches, minimal damage such as on the chin and the upper lid of the proper left eye, some of the usual surface wear, all as visible on the photographs. The tip of the nose somewhat stump, which may have been caused by hitting a hard surface (in that case in ancient times, considering the patina on it) or may have been made like this on purpose. A slight loss at the rim of the cap; a small hole at the back of the head, probably a small casting flaw; the remains of a pin on top of her head indicating that some adornment is now missing; else in excellent state of preservation with a glossy green and brown patina. Comes with a custom stand (on the back of which a number is written). A highly desirable bronze!