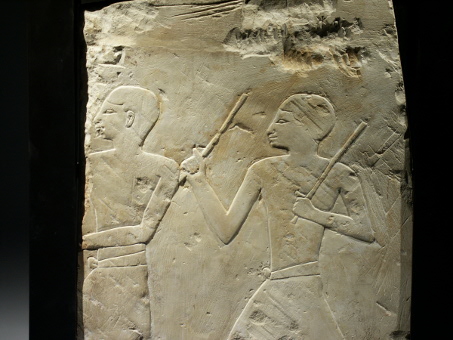 Description:
This is a large limestone fragment executed in raised relief, showing two men in procession, walking to the left. Both are wearing a wrap around skirt that is tied at the waist with a belt; presumably these are short skirts, as usual in procession scenes, but it is impossible to be sure about this. Both wear their hair short, and especially the man in the middle of the scene seems to be smiling. He is holding two sticks in his clenched fists. Details, although slightly worn here and there now, were carefully executed, such as the fingers of his right hand and the shape of the nose with its large nostril. Of a third person, less well executed, traces can be seen on the right; he is holding a stick as well.

Above the scene a short inscription has been deliberately hammered away, possibly to erase the name of the person depicted; this was not uncommon in ancient Egypt when a person had fallen into disgrace. Destroying the name was more than just preventing people to know who the person depicted was: since the name was an essential aspect of being, wiping it out meant destroying the person. Of the hieroglyphs only one has survived enough to make it possible to read it with certainty, the sign reading ms; this may have been part of his name (like in Ra-ms, Ramose), or it may have been part of the word saying "born of" (like in X, born of Y, meaning that X is the son of Y).

The previous owner was convinced that this is a relief from the Old Kingdom, but stylistic details show us that this is not correct. The relief clearly dates to the New Kingdom; a specialist in the British Museum has dated it more specifically to the reign of Thothmes III (1479-1425 B.C.), based on the relatively small eyes and the simple yet archaising style.

Condition:
Fragment as shown, with some slight silt deposits, surface wear and chips. Overall in excellent condition. Mounted in a metal frame.