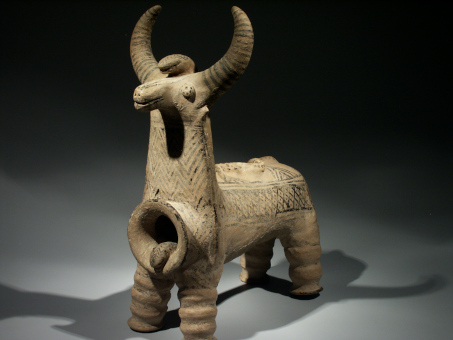 Description:
This is by far the most remarkable object that we have handled in recent years: very rare, highly important, with a star provenance, published more than once and exhibited in several museums and exhibitions.

It is a statuette of a bull, with a vessel-like hollow body, and solid neck, head and legs. The legs consist of horizontal rings, and the horns display a decoration of horizontal bands, bringing at least one scholar to the conclusion that the animal is in fact a ram, not a bull.

There is an undulating snake on the back of the animal, its head emerging between the horns. Another snake is peeping from the darkness of the aperture in the chest. The eyes of the bull are composed of applied rings, those of the snakes are inlaid.

The object has a painted geometrical decoration, dot-filled cross-hatching along the body with triangles above, rows of zigzags on the upper head and chest, bands around the legs and horns, and spirals on the backside.

Ghirshman, publishing this piece, has pointed out that very few Luristan terracotta rhytons are known that are adorned with a red painted decoration, and he considered this bull the most remarkable one among them, adding that it certainly had a ritual purpose about which we have no details. The small hole by the tail of the snake may have served a purpose in this context.

In the 1970s the bull was exhibited in the British Museum, London; the museum has informed us that it has been on display in the Anatolian (!) galleries, but also pointed out the possible Cypriot background of the statuette. Indeed, in 1929 the Swedish Archaeological Mission found about 2,000 terracotta figures in the sanctuary of Ayia Irini on Cyprus, some of which depicted a bull similar to this one in shape and posture and with a snake on its back, its head between the horns (however, not with the second snake creeping out of the opening in the chest). Half of the terracotta figurines are now in the Cyprus Museum, Lefkosia, whereas the other half are in the Medelhavsmuseet in Sweden. At the same time, the British Museum also mentioned the possibility of an Iranian background of the statue. However, since no mention was made of the exhibitions in the 1960s and the publications, it seems that the true provenience had been lost by then.

When Christie’s offered the statue for sale, they described it as Cypriot / Eastern Mediterranean. Due to the fact that more or less comparable bulls were found in Ayia Irini, this statuette has frequently been thought to have come from Cyprus. In our 2013 catalogue we also indicated “Eastern Mediterranean, probably Cyprus”. However, since the publication of that catalogue further research has brought to light the full provenance and the exhibition and publication history, making it clear that the bull comes in fact from Luristan.

I know of only one parallel, from the collection of Saeed Motamed, which was also on display in the same series of exhibitions in the 1960s, and which has been published several times as well; see also the book 5000 Jahre perzische Kunst (Münchner Stadtmuseum, Ausstellung März-April 1961), p. 23, no. 4 and the illustration on the cover of the book.

The statuette that we are offering for sale was auctioned by Christie’s London in 1991, where it brought an amount of GBP 20,000 plus buyer’s premium, the equivalent in those days of about € 34,000 or US$ 38,000. It seems that by then most of the provenance history was forgotten, as well as the fact that the statuette was published and exhibited in so many museums; with this information the sale price would probably have been even higher.

The statuette has been TL tested by the Oxford Research Laboratory for Archaeology; a photocopy of the test report comes with the object.