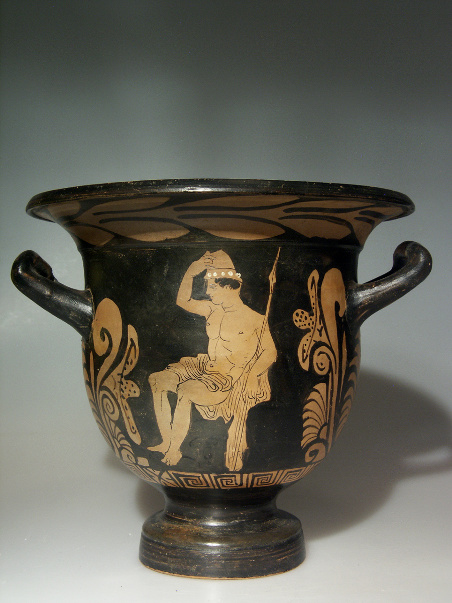 Depicted on one side is a young warrior, partially draped and sitting on the folds of his cloak which seem to function as a cushion. With his right hand he reaches up towards his pilos helmet. Leaning against his left shoulder is an upright spear.

The other side of the krater shows a youth wearing a himation with black borders. His right hand rests on top of a column with a Ionic capital; his left arm, mostly hidden under the folds of the himation, appears to be akimbo. On the wall behind his head, at the upper right hand side, a strigil is visible, perhaps suspended from the wall; possibly this is an indication that the rather unusual scene is located in the palaestra (the ancient Greek wrestling school).

The areas where the handles are located are decorated with large palmettes and other floral motives. All scenes are bordered by a band of meanders and saltires below, and a band of laurel leaves above, just below the rim. White has been applied to decorate some details in the scenes: the strigil and the offset rim of the pilos helmet.

This vase is very difficult to photograph, the pictures simply do not do justice to the quality of the scenes.

Background information: The Parrish Painter and his circle are considered to be descendants of the Cassandra Painter, see Arthur Dale Trendall, The Red-Figured Vases of Lucania, Campania and Sicily (Oxford Monographs on Classical Archaeology) (Oxford, Clarendon Press, 1967), p. 247-262, and idem, Red Figure Vases of South Italy and Sicily: a Handbook (London, Thames & Hudson, 1989), p. 158-159, as well as "Chapter V: The Parrish Painter and his Circle. LCS. pp. 247–262; Suppl. I, pp. 44-5; II, pp. 191-2"; Bulletin of the Institute of Classical Studies, Supplement No. 41: The Red-Figured Vases of Lucania, Campania and Sicily Volume 30 (1983), p. 123–127. It has been remarked that the youth on this krater is stylistically close to the "neat figures" of the Cassandra Painter, but that the looser drawing of the reverse and the distinctive floral decoration are more typical of the Parrish Painter.

Condition:
Professionally repaired from a few large fragments, but complete, with no new material. Some scratches and other surface damage as is common to all ancient pottery, unimportant and not affecting the artistic quality of this vessel. A very desirable little krater with marvellously executed and highly interesting scenes.