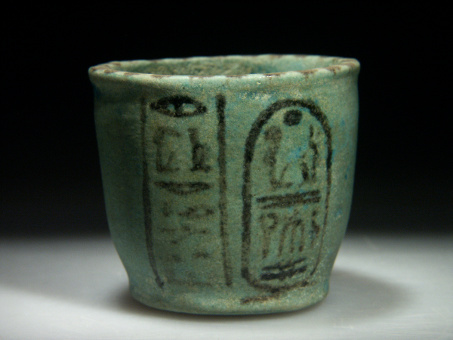 Description:
This is a composition offering cup with a cylindrical form, tapering near the base and neck to form a bulging body. The cup has a slightly flared rim, decorated with black rays, and is decorated in black with a hieroglyphic text in two columns, including the cartouche of pharaoh Ramesses IV.

The text reads: "Ramesses, the Ruler of Justice is Re, beloved of Amun (Ra-msi-sw, HqA-mAat-ra, mri Imn), (beloved of) Osiris, the Lord of Rosetau".

Rosetau (Ra-Setjau, literally "Entrance of the underground corridors", originally referring to the tombs and later also to the passages in the underworld) was both the name of the necropolis of Giza and Sakkara and one of the general indications for the other world. Usually it was the funerary god Sokar who was called Lord of Rosetau, but frequently other funerary gods like Osiris were also mentioned.

Robert Steven Bianchi (in Friedman 1998, p. 198) remarks that the colour of such funerary vessels (blue, green, or turquoise) was chosen because of its symbolic associations with resurrection and rebirth.

This offering cup is relatively large, being 6.2 cm in diameter. Usually cups are much more narrow than this one, with an average diameter of circa 3.5 - 4.5 cm.

Condition:
Intact and in excellent condition overall, some encrustation, some wear and pitting to the glaze and pigment. A magnificent and large example with a wonderful colour!