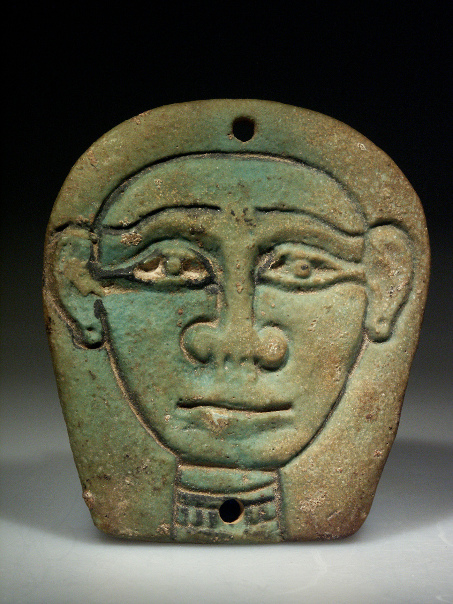 Description:
A beautifully rendered representation of a female face with clearly delineated features and modelled with flared nostrils. She is wearing a collar or choker. Her face is surrounded by a band, representing either her hair or a wig, leaving the ears visible. The plaque is pierced through the head and neck in order to attach it to a mummy or mummy net.

It is very uncommon to find representations en face in Egyptian art, except for depictions of the goddess Hathor. Therefore this is a remarkable and rare piece.

The face represents the Egyptian goddess of the sky, Nut. But her role was sometimes taken over by another goddess, Hathor. Both goddesses could be depicted in the form of a cow, whose body formed the sky. This made it easier to exchange functions between the two goddesses. Since it is usually Hathor whose face can be shown en face, many Egyptologists have argued that plaques like this depict her. However, it is impossible to identify the goddess on our plaque with certainty. Several very similar specimens in the British Museum London have been described as Nut.

According to the ancient Egyptian beliefs the goddess of the sky, Nut, stood on her hands and feet, arched over the earth, her face at the western horizon. The sun was thought to travel across her body. In the evening, at the western horizon, Nut would swallow the sun disk, after which the sun would travel back to the east through her body during the night. The next morning Nut would give birth to the sun again in the eastern horizon.

Each Egyptian hoped to join the sun god after death, travelling with him across the sky and being reborn with him every morning; in fact the deceased was supposed to assimilate with the sun god, to become god himself. And like the sun was reborn every morning, coming out of Nut, the deceased hoped to be reborn daily, coming out of the sarcophagus in which he was placed. From very early times the sarcophagus was therefore associated with Nut. Pyramid texts from the Old Kingdom inform us about the sarcophagus being the mother of the deceased, who will give birth to him. In many cases there is a representation of Nut, arched over the deceased; this can be seen on the ceiling of royal tombs in the Valley of the Kings, but also the vault of many other tombs, painted blue and covered with stars, refers to the goddess. In addition there is often a depiction of Nut on the inside of the lid of the sarcophagus.

Starting roughly at the beginning of the first millennium BC the Egyptians would place a net over the mummy to protect him. Such nets were made of faience beads, and they could be adorned with all kinds of amulets (a djed pillar, a winged scarab, the children of Horus etc.). The bright, blue colour of the beads was a reference to the sky and to rebirth and resurrection. Such bead nets could incorporate a beaded face, which is usually explained as a mask representing the deceased, but sometimes a faience plaque is also included, showing the face of a goddess.

Condition:
Intact with some discoloration, encrustation and surface wear as shown. A beautiful and large example with a lovely colour.