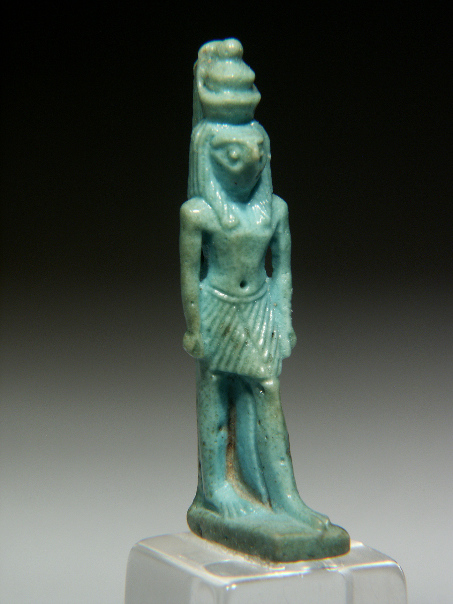 Description:
A highly detailed glazed composition amulet with a beautiful light green and blue colour, showing the god Horus in a striding position with his left foot forward. He has the body of a human being, and the head of a falcon, and he is wearing a striated wig and kilt. On his head he has the double crown of ancient Egypt, combining the White Crown of Upper Egypt (Hedjet) and the Red Crown of Lower Egypt (Desheret). This crown was also known as the Pschent (a Greek indication for the ancient Egyptian sxm.ty, "the two Powerful Ones"), referring to the two goddesses Nekhbet and Wadjet, protectresses of Upper and Lower Egypt. The amulet was pierced horizontally through the back pillar for suspension.

Condition:
Intact with some encrustation; attached to a small acrylic plinth.