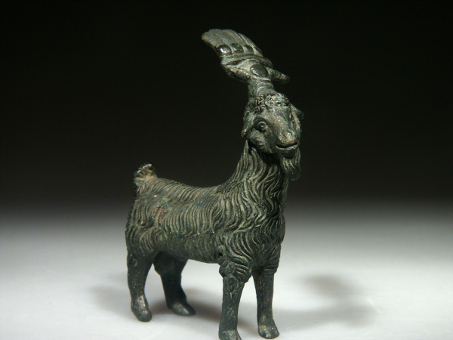 Description:
This is a very high quality bronze, once in the famous collection of Leo Mildenberg, and published.

Depicted is the god Banebdjedet ("Ram of the Lord of Mendes"), standing with his left legs slightly advanced and his head lifted and turned slightly to the right. The animal has a wonderful face with a mouth that seems to be smiling, floppy ears and blankly staring eyes. A so-called hemhem crown is visible on top of its head. The coat of coarse hair, arranged in patterned rows of thick, loose waves, was formed in the mold.

The subject of this statuette is clearly Egyptian but, in the words of Kozloff (1981), the naturalistic movement is singularly Roman. The even patterning of the animal’s coarse hair suggests a provincial provenance. It is possible that the bronze was made by a Roman artist in Egypt, but it is more likely that the cult of the god was carried to a distant part of the empire and influenced the creation of this bronze.

Background information:
The animal was sacred in Mendes in dynastic times, and was usually depicted as a ram, although there are also depictions where he has a human body. In Greek and Roman times he was represented as a he-goat, relating him to the then popular classical god Pan. It has been suggested that the goat was perhaps a more familiar symbol of fertility to the Greeks than the Egyptian ram (Gwyn Griffiths, 1955).

Classical authors like Herodotus and Pindar tell us that women from Mendes had sexual intercourse with he-goats; Clemens Alexandrinus and Plutarch however inform us that the sacred goat preferred she-goats to beautiful women.

In traditional Egyptian mythology the god was considered to be the ba (often incorrectly translated as "soul") of Osiris and of Re; there were especially solar associations. Banebdjedet was also associated with other gods. A sistrum which mentions Ptolemy II carries the text: "the august sistrum gives praise to the Lord of heaven, the Foremost of the temple: Amun, the Ram of Mendes" (Van Siclen, 1985, p. 228-229). And the first pylon of the temple of Medinet Habu (exterior face of the south tower) has a text in which the god Ptah-Tatenen addresses king Ramesses III with the words: "I am thy father, I begot thee, so that thy entire body is of the gods, for I assumed my form as the Ram, the Lord of Mendes" (Medinet Habu, 1932; Edgerton - Wilson, 1936; Gardiner, 1931).

Already the Middle Kingdom coffin texts contain references to the god, and also a a statue of Amenemhat I found at Tell el-Dab`a carries a dedication to Banebdjedet (Gauthier, 1934; Habachi, 1954; Ryholt, 1997). In spell 42 of the Book of the Dead the body parts of the deceased are identified with various gods; the arms are equalled to Banebdjedet. It was also Banebdjedet who was asked by Atum to separate (or judge between) Horus and Seth in their conflict (Broze, 1996).

Condition:
Part of the right horn and plume tips broken from the crown, else in excellent condition with a dark green patina; an inventory number from the Mildenberg collection painted underneath. A statuette of extremely high quality.