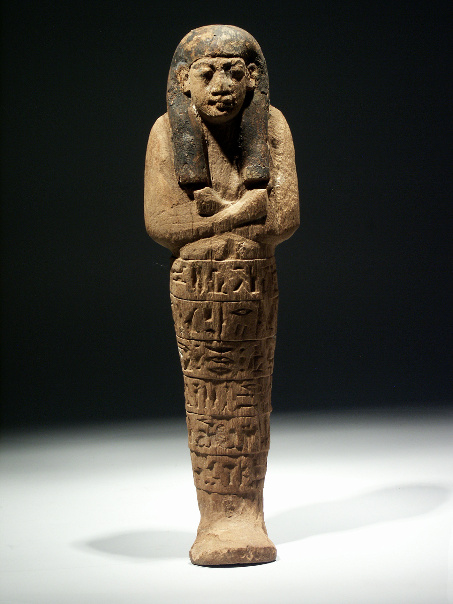 Description:
This is a large shabti of high quality. It dates to the New Kingdom, more specifically to the late 18th dynasty - early 19th dynasty, circa 1550-1070 B.C., so it is about 1,000 years older than most shabtis on the market. It was made of wood, a perishable material, which also accounts for the fact that such objects are not very often seen on the market.

Aset is shown mummiform, with only her head and arms protruding from the shroud. She is wearing a tripartite wig, with two long, thick tresses in front of the shoulders, leaving the ears visible. Her round face is well modelled with details sculpted in relief, such as her almond shaped eyes, her full, fleshy lips, her ears and nose. Her arms are crossed on the chest, the right arm over the left one. The wig, eyes and eyebrows are painted black, and there are traces of red pigment on the proper right shoulder, and of a lighter pigment in some of the incised hieroglyphs.

An inscription consisting of six lines and one column of incised hieroglyphs covers the lower part of the shabti. The text mentions the name of the owner, Aset, and contains part of the spell for the shabti as it con be found in the Book of the Dead (spell 6), telling to shabti to answer by saying "Here I am", whenever its owner is called upon to do any menial work in the hereafter, such as cultivating the fields, irrigating the river banks and ferrying the sand.

This shabti has been in a Parisian art gallery for an amount of € 15,000; it is offered here for considerably less.

Condition:
Intact with some damage to the wood as shown; some wear to areas of the surface, especially on the back, making the hieroglyphs on that side somewhat difficult to read, and to the black paint on the wig. Traces of red pigment on the proper right shoulder. Traces of white pigment in some of the hieroglyphs.