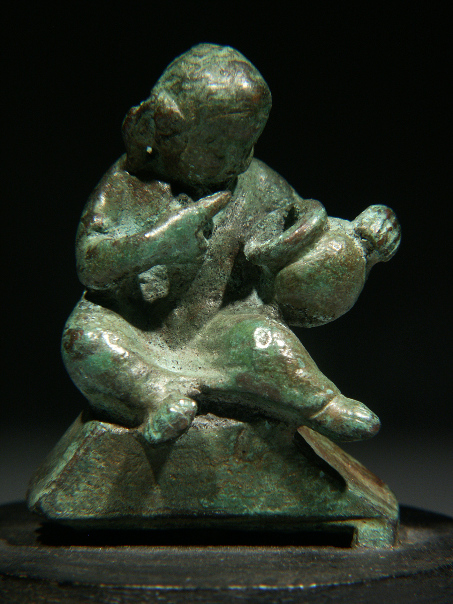 Description:
This is a rare representation in bronze of the Egyptian child god Harpokrates with his left arm around a large jar and his right hand finger to his lips. The god is wearing a tunic and the side lock of youth, and is seated on triangular pediment.

The motif of Harpokrates holding a pot is well known; in terracotta it is in fact the most widely spread of all the depictions of Harpokrates. In bronze however the scene is much more rare. Two basic types can be distinguished in these representations: Harpokrates with his right hand in the pot; and the god with the index finger of his right hand at his mouth and holding the pot in his left arm.

Malaise (1991), who surveyed the total of iconographical data, was able to identify the most likely content of the recipient with the help of a text of the 4th century Christian writer Epiphanes: it is a favoured children's liquid food which also served therapeutic purposes. As such it refers to the healing powers of Harpokrates. The statue type is rooted in the alimentary practices of Egyptian households.

Malaise (1994) also argued that the inscription on a Harpokrates statuette in the Cairo museum (CGC 27043 = JE 27635) should not be read as "the sprinkler of purifying water" (Borchardt 1902-1903) but as "the bearer of nourishment for children". Statuettes of other divinities bearing pots also had a protective function for women in childbirth and their children.

Harpokrates being the most popular god of the Graeco-Roman period in Egypt, his statuettes were dispersed in the entire Roman empire.

Size:
Height 4.4 cm excluding modern base, or 6.5 cm including base.

Condition:
The figure is intact; minor roughness to the bottom of the pediment on one side; some wear and encrustation to the surface, as shown; mounted on a modern wooden base; an old collection label underneath, reading "191".