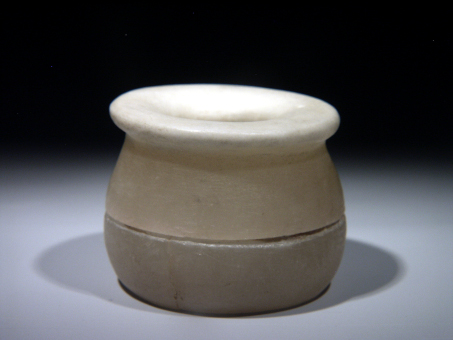 Description:
This is a small Egyptian vessel with flattened rim and made of two separate parts. Jars like this were mostly used for ointment. The vessel most likely dates to the Middle Kingdom, early 2nd millennium B.C.

Like most vessels of this type, it was made of calcite (a carbonate mineral and polymorph of calcium carbonate) and not of alabaster, as is often maintained incorrectly, even by Egyptologists; the material is also called Egyptian alabaster. The Egyptians quarried this stone from the Early Dynastic Period onwards, especially in Middle Egypt, more particularly between Minya and Assiut; the most important quarry was that of Hatnub near Amarna; an Old Kingdom quarry was near Helwan.

Calcite is a whitish stone with differently coloured veins. When lit from above the vessel creates a wonderful effect. The slightly translucent stone seems to glow and its veins are clearly visible.

Condition:
Small part of the rim broken off and professionally rejoined, else intact. An old collection label underneath.