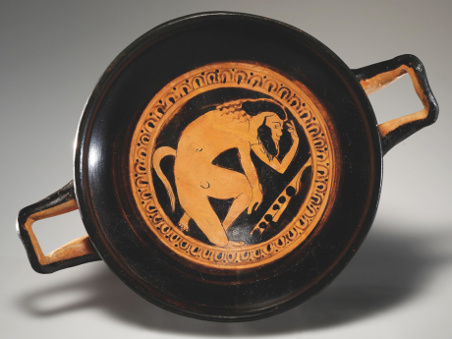 Description:
This is a wonderful and important Attic cup, decorated by a well known painter. The piece is published and has a great provenance.

The cup is deep and has an offset lip, resting on a short stem. Under the foot, which is glazed, a Greek graffito can be seen, consisting of the letters BY.

The scene on the cup, placed inside the tondo, is most interesting. Depicted is a satyr with a rather savage look in his eye, and with long, waving hair, a beard with the long hairs indicated by stripes, and a long tail. He is depicted in a kneeling position, seen in three-quarter view to the right. His face is rendered in strict profile, but his torso is shown full front as are the toes of his right foot. Suspended in front of him is a flute-case, which indicates that music is implied. This music probably also accounts for the position of his arms, which are flung out as if the satyr is dancing. The whole scene is surrounded by a border of ovolos, which is uncommon. Normally there is a single reserved line.

The Heraion painter was so named after a work created by him that was found in the Heraion of Delos (Delos 658). He was a member of the circle of the Pythos painter, famed for his sketch-like relief lines and abstraction. He worked ca. 510-500 BC. For the painter see Beazley (1963) and Beazley (1939); Beazley identified a fragment of an Attic cup, found in Al-Mina, comparing it with parallels in New York and Würzburg as well as the cup fragment Acropolis 131. All show the same motif of a satyr with a flute-case. See also Stewart and Martin (2005), p. 83.

For cups with this subject by the Heraion painter see Beazley (1963), I, p. 143, nos. 12, 13, 15, 17 (satyr kneeling); nos. 1, 5, 7 (youth kneeling with flute-case); nos. 14, 16 (satyr kneeling with flute-case). Our cup is no. 14 in the publication by Beazley, although the description he gives in not entirely correct: he says that the flute-case is in the left hand of the satyr rather than suspended in front of him. Another cup with offset lip and with a close parallel for subject, composition and style of drawing has been on the Swiss market, showing a kneeling satyr in almost mirror reverse, with a flute-case suspended from the border of the tondo.

This cup has been in the collection of Pierre Devambez, who was the chief curator of the Department of Greek and Roman Antiquities, in the Louvre museum, Paris, which not only makes an excellent provenance but is also extra testimony of the authenticity of the piece.

Condition:
Repaired from a few large fragments; some of the usual surface wear and scratches, common to all ancient pottery; small area at the centre of the tondo where the glazed surface is slightly corroded; very small part of the glaze on the inside with a slightly brownish colour instead of black, due to firing conditions. Overall in excellent condition and with a very interesting decoration.