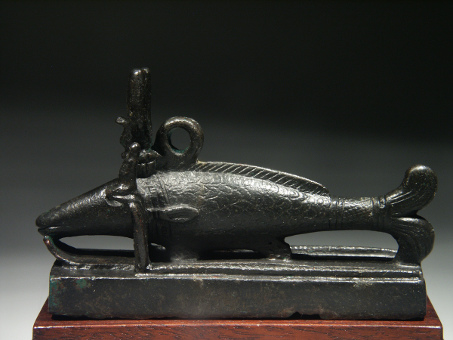 Description:
This is one of the most remarkable representations I have ever seen of the Oxyrhynchus fish. The animal is depicted in its typical form, with a distinctive elongated, downturned snout and equally distinctive bifurcated tail. The fish is wearing a headdress with frontal uraeus, surmounted by a solar disc between cow’s horns, the crown of the goddess Hathor, to whom the fish was sacred. The animal has a suspension loop behind and a long, thin dorsal fin which terminates in the tail. Its deeply recessed eyes were possibly once inlaid. The fish is perched on a sled, attached by means of the lower fins, tail and curved end of the base where it joins the mouth. The whole statuette has a rectangular base with two tangs for attachment.

There are two features that makes this representation so special. First there is a stunningly beautiful detailing of the animal's skin. The scales are very finely incised; it has been suggested that in view of this quality, the body of the fish may have been gilded. Equally well detailed are the collar, the gills and striations on the top and tail fins.

And the other feature, something that I have never seen before on any of the Oxyrhynchos fishes I have ever come across, is the pair of long-bodied cobras accompanying the fish, one on either side. These snakes, the head erect and showing their fully puffed-up hood, both wear a crown: one the white crown of Upper Egypt and the other the red crown of Lower Egypt. This identifies them as Nekhbet and Wadjet, the protecting goddesses of the two parts of the country. Originally these were seen as a vulture and a snake, but because of their similar functions they could also be shown in similar shape, especially as cobras. Quite remarkable to encounter them here in the presence of the Oxyrhynchos fish!

Background information:
The ancient Upper Egyptian town Per-Medjed (modern el-Bahnasa) was the capital of the 19th Upper Egyptian nome. It was called Oxyrhynchos Polis by the Greeks, which means "Town of the sharp-snouted fish". This refers to a species of fish that lived in the Nile and that, according to mythology, ate the penis / phallus of Osiris after the dismemberment of this god by his brother Seth. It has been debated which species of fish it is, and there is some consensus that it is a species of mormyrus.

According to Greek historian Plutarchos (1st-2nd century C.E.) the inhabitants of Oxyrhynchos and those of a neighbouring town called Kynopolis ("Town of the Dog") were engaged in hostilities because a person from the latter town ate a sacred fish, after which the inhabitants of Oxyrhynchos started catching and eating dogs; this resulted in a civil war which had to be ended by the Romans (De Iside et Osiride, 72).

Condition:
There is a small area of restoration to the crown, mainly to the tips, and to the crown of one of the cobras, else intact. The statuette has been cleaned and treated for protection of the bronze, but the original encrustation has intentionally been left under the base. Mounted on a modern wooden base. A magnificent bronze!