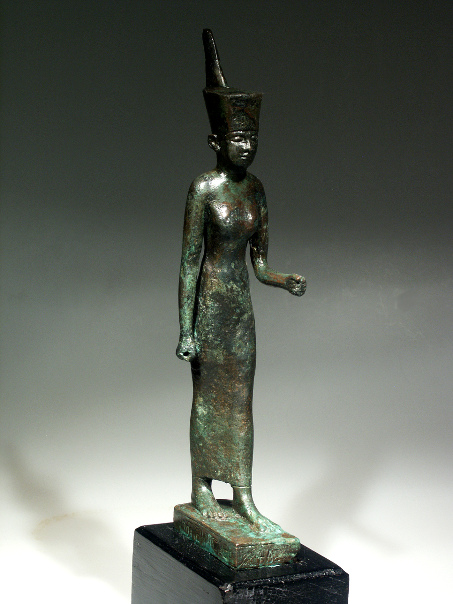 Description:
This is a bronze statuette depicting the Egyptian goddess Neith. She is shown in a striding position, her left foot forward. The goddess holds her right arm vertically against her side. Her left arm is bent at the elbow. Her clenched fists are pierced to hold the implements or weapons with which the goddess is sometimes depicted, but there are now missing. Neith is wearing a long, tight-fitting dress and has a crown on her head, which can be identified by its shape as the red crown of Lower Egypt. The statuette is standing on an rectangular integral base with carries a hieroglyphic inscription on two sides. The text mentions the donor of the statuette and asks "O Neith, may you give life to Hor, the son of Amunirdis, born of the Lady of the house Nehemes(?)".

Background information:
Neith was an Egyptian goddess of war and of hunting with main cult centres is Sais (Delta) and Asyut (Middle Egypt). Her first appearance in Egyptian religion was rather early; her symbol appears already on stelae from the first dynasty. Her name was part of several royal names from this period as well.

As a goddess of war she had to help the pharaoh during his battles, and to "open the way" for him, a function she had in common with Wepwawet; through this she also became a goddess who gave protection, and because of this was also incorporated in the group of gods who helped the deceased. Usually together with Isis, Nephthys and Serket she offered protection to the sarcophagus (already in the Old Kingdom Pyramid Texts) and to the canopic chest, containing the internal organs which had been removed during mummification. More specifically she was linked to Duamutef, one of the children of Horus, who watched over the stomach of the deceased.

Neith was also associated with weaving and was believed to be the one who wove the bandages of the mummy. As the goddess of weaving she was also the protector of women as well as of marriage.

Another association of the goddess was with the water of the Nile (sometimes she was called the mother of the crocodile god Sobek) and because of this was even considered to be the personification of the primeval waters of creation; she was identified with the goddess Mehetweret ("The Great Flood") and also linked to Khnum as his wife and as the source of the Nile. Neith and Khnum were seen as creator gods in the temple of Esna and even melted together into one androgynous creator god.

Size:
Height 18.5 cm without the modern base.

Provenance:
The statuette was purchased by Mr. and Mrs. J.J. Mitchell during their visit to Cairo in February 1964. They paid an amount of $380 for it. The acquisition was done through the curator of the National Museum of Egypt, Gamel Salem, who also granted the export permission. The statuette ended up in the collection of Leighton A. Wilkie (1900-1993). During his life Wilkie invented, perfected and successfully marketed several machine tools, among them a machine called the DoALL. The same name was later given to his company, which developed into a large chain of industrial supply centers in the United States. The object will come with copies of the original documents as well a photograph taken around 1970, while it was on display at the Wilkie Brothers Foundation.