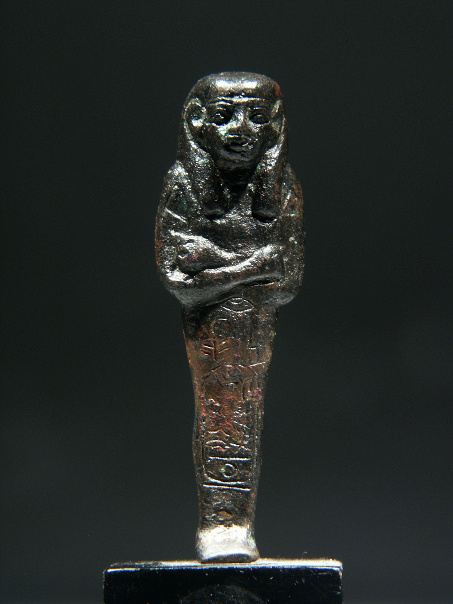 Description:
This is a solid cast bronze royal shabti, rarely offered on the market, scientifically tested for authenticity, and mentioned in a scientific publication!

The shabti was made for pharaoh Psusennes I (21st dynasty). He is depicted mummiform and wearing a tripartite wig, leaving his ears visible. His arms are folded over his chest, the right arm over the left one. He is holding the usual agricultural implements, and has a seed bag slung over the shoulder, hanging on his back. The front is incised with his name within a cartouche; the text reads: "The Orisis, King Pa-seba-khai-en-niut, beloved of Amun". His name means "the star that appears in the city"; Psusennes is the Greek form of this name.

Background information:
Pharaoh Psusennes I lived during the 21st dynasty, ca. 1000 BC. The precise length of his long reign is debated among Egyptologists, but it was at least 41 years and may have been up to about ten years longer.

Before the discovery of the royal tombs at Tanis, only six royal bronze shabtis were known, one for Ramesses II and five for Ramesses III. But during the excavation season 1939-1940 archaeologist Pierre Montet discovered the intact tomb of Psusennes I in Tanis in the Delta. In it he found, among many other things, hundreds of shabtis, many of which were of bronze. The exact number has never been published, but soon afterwards the total number of shabtis on the market and in collections was far larger than the number found by Montet, because many modern forgeries were made. As a result of this, every shabti on the market was automatically looked upon with suspicion.

Test results:
The shabti that is being offered here was carefully researched, not only microscopically but also using several non-destructive testing methods, Raman spectroscopy for the surface and Neutron Diffraction for the core. These tests were done at the Department of Metallurgy, Electrochemistry and Materials Science, University of Brussels (Belgium) and at the Department of Nuclear Research, Institute of Isotopes, Budapest (Hungary). Raman spectroscopy showed traces of malachite on a lower layer of cuprite as well as azurite. Neutron Diffraction showed the presence of a significant amount of cuprite, an indication that the copper corrosion has gone deeper into the bronze itself over the years, which is a process occurring during long-time burial. These results, in combination with other facts observed, provide proof that this shabti is authentic. A copy of the test report will be sent to the buyer of the shabti.

Condition:
Intact with some expected surface wear and pitting, normal on all ancient bronzes ; a minuscule air bubble hole, created during casting of the shabti, in the back of the wig; a warm brown and reddish brown patina with minuscule green corrosion products at several positions, as shown; a small hole drilled in the bottom for mounting. Overall in excellent condition. Comes with a modern wood base.