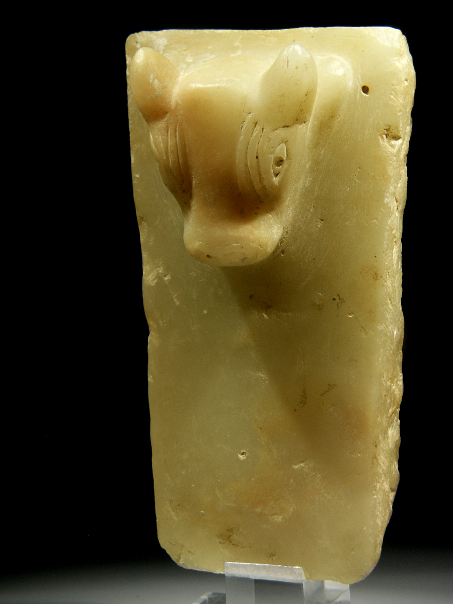 Description:
This rectangular plaque, coming from the ancient South Arabian kingdom of Qataban and dating to the early 1st century C.E., shows the head of a bull in high relief, projecting from the slab; the head has striated markings, emphasising the wrinkles on the bull’s head. The animal’s eyes are engraved, and the pupils are drilled, possibly for inlays. The ears are visible behind the horns.

This well sculpted head is thought to have come from Jabal Hayd Ibn Aqil, the necropolis located in the Wadi Bayhan, a short distance north of Timna, the capital of Qataban. Representations of bulls are frequently attested in the funerary art there; usually only the bull’s head is shown, mounted on a plaque and executed in remarkably realistic detail, observing strict frontality. Such stelae were inserted into niches in the tombs.

The presence of these representations of the bull verifies the great significance of the animal in the religious thought of the ancient Qatabanians, although what the association was is not clearly understood. There is no inscription on this stela, which prevents our knowing to which god it was dedicated. The bull was, however, the symbol of the god Almaqah. Like in Canaanite religion (another ancient Semitic culture) the bull was associated primarily with a particular deity, but was apparently not considered to be sacred in itself (Cleveland 1965, p. 36; see below).

Originally the plaque may have been larger; it was reduced in size at some point. Funerary sculptures from this area were frequently carved from a fine-grained translucent yellowish stone which resembles alabaster. Analysis of some 400 objects in the British Museum has revealed that none of them were actually made of true alabaster but most were made from varieties of calcite (St John Simpson 2002, p. 191).

For south Arabia and the time period from which this object dates see for example Robert G. Hoyland, Arabia and the Arabs from the Bronze Age to the Coming of Islam (Ancient Peoples Series) (London, Routledge, 2001), p.40-48.