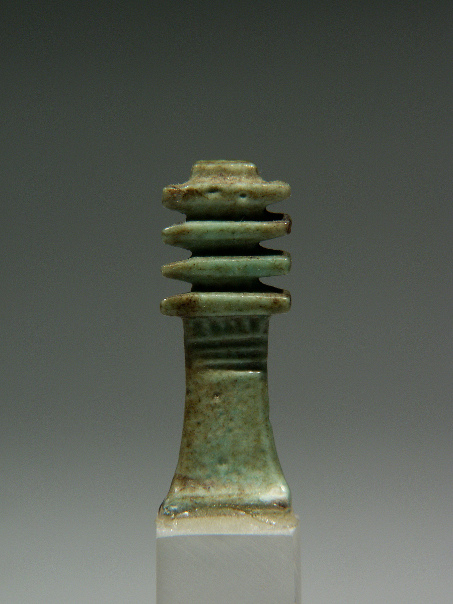 Description:
This is a very nice amulet in the shape of a djed pillar, consisting, as usual, of a tall shaft which is crossed by four horizontal ribs near the top, with three horizontal lines below, and a back pillar. The amulet is pierced horizontally for suspension.

The djed first appeared in the Old Kingdom and soon became one of the most important funerary amulets, intended to give stability to the backbone of the mummy. There has been some discussion about what the djed depicts, but nowadays it is more or less generally accepted that it is a stylised trunk of a tree with its branches lopped off, although others maintain that it is a sheaf of grain or a bundle of papyrus stalks. Early it was associated with the gods Sokar and Ptah, but later it was adopted by Osiris, to become a stylised representation of his backbone; some rare examples were even provided with the atef crown.

The ancient Egyptian word Dd (djed) indicated endurance, stability, rejuvenation and similar concepts. A text from the Book of the Dead (spell 155) was supposed to be recited over a djed amulet made of gold and placed on the throat of the deceased on the day of the burial; it would make the deceased "a worthy spirit who will be in the realm of the dead on New Year's day like those who are in the suite of Osiris". However, many of these amulets were found on other parts of the body of mummies, especially on the breast and stomach, and few were of gold. Instead, many of them were made of faience and were either green glazed or blue glazed, these colours being related to regeneration.

Size:
Height 2.5 cm excluding the base.

Condition:
Intact with some minor discoloration, as shown; glued to a modern base. Very sharp details.