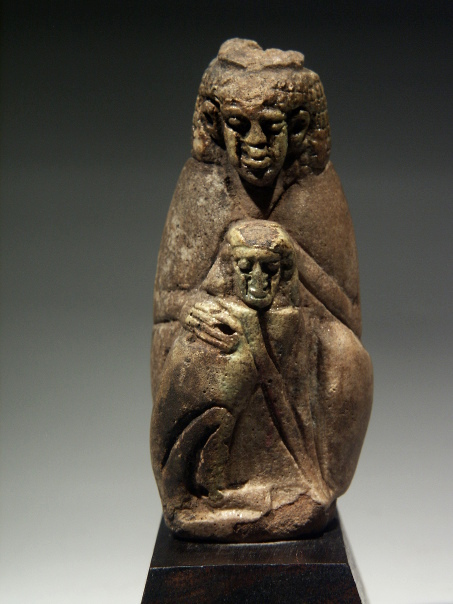 Description:
This is a rare perfume flask, made of Egyptian faience, that was given the form of a squatting monkey (or monkey-like woman?). She is holding a squatting child, also monkey-like, in front of her, her left hand resting on the head of the child and her right hand on its shoulder. The female has a face executed in deep relief, with round eyes, protruding lips, a full fleshy nose, and rather prominent ears. A cross-hatched wig covers her head, behind the ears and around the opening on top of her head, which is the mouth of the vessel. Her ovoid body is cloaked in a leopard skin, which is indicated by a vertical row of yellow spots down her back. There is a tail curving round her lower right side, which may be part of the leopard skin or, alternatively if this is indeed the depiction of a monkey, her own tail.

This vessel relates to the Leopard Spot Group (Webb 1978, p. 11 ff.) whose figures wear spotted animal skins. Webb writes: "More usually, the skin is omitted and only a schematic pattern of dots remain on the back".

For other faience bottles and other objects in the shape of a monkey holding an infant see the study by Cline (mentioned below), with further bibliography.

Cf. also a mother and baby monkey aryballos, once in the possession of William Kelly Simpson, published by Friedman (see below).

Background information:
Faience vessels were widely distributed in the Mediterranean world in the 6th century BC. They were most likely carried with other Greek products, and they have been found in burials and sanctuary deposits in Greek colonies, trading posts and settlements in major parts of the Mediterranean, including Egypt. Many of these vessels show an Egyptian influence, especially because of the shape in which they were made (for example tilapia fish, grasshoppers, hedgehogs and monkeys, all animals which had religious meanings in Egypt). Such vessels are considered to have been manufactured in Egypt, in an area under East Greek influence. Many are described as coming from Naukratis, but few have actually been found there. At present it is not quite clear whether the industry was based in Naukratis or in a number of centres in Lower Egypt, or was connected with centres on Rhodes. In any case there was a strong link between Egyptian and Greek cultures and manufacture techniques during this period.

Condition:
Some surface wear and pitting, a few minor spots where the surface of the object was slightly flaked, some roughness at the front of the base, a few chips at the rim, else intact and in a very good condition overall; mounted.