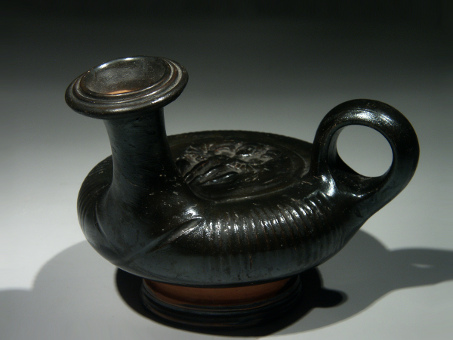 Description:
This is a black glazed clay vessel, dating to the 4th century B.C. and western Greek in origin. The central medallion is showing a winged sphinx, seated and shown from the front; the depiction is very clear and not worn, as is often the case. The vessel has a low, broad body, the exterior of which shows a ribbed decoration, as well as a cross ornament below the spout. There is a loop handle on the shoulder. The spout shows a rounded molding of the rim. The reserved transition to the base is reddened.

A guttus was a Greek vessel used for pouring liquids like water or oil, during offerings and at other occasions, which was done dropwise (from Latin gutta, to drop). The shape of these vessels, used in Greece but usually referred to by the Latin name, is not known with certainty. In modern day archaeology the name is used for vessels like the one that is being offered for sale here, usually western Greek, with a closed body, a small handle on the shoulder and a narrow, elongated spout with molded rim.

Condition:
Intact, with just some minor surface damage and wear; a very desirable and rare type.