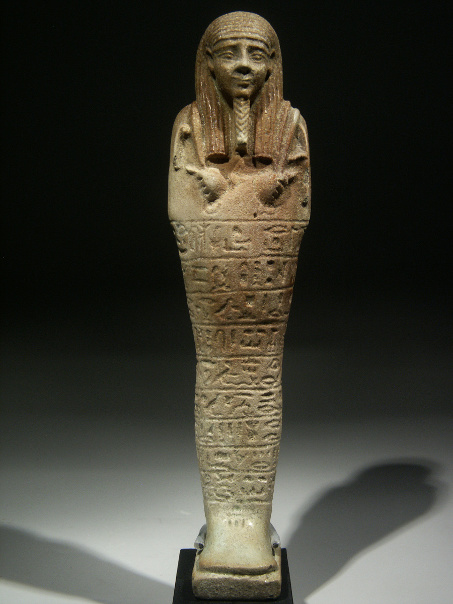 Description:
This is a sizeable shabti, made of Egyptian faience, for an important man called Tjai-iniheret-imu. The owner is depicted mummiform with only the head and arms protruding from the shroud. He has a plaited false beard and is wearing a striated tripartite wig, with two thick tresses in front of the shoulders, leaving the ears visible. The arms are crossed on the chest, the proper right arm over the left one, and the hands are holding the usual agricultural implements, a pick and a hoe, executed in relief. A seed bag is showing on the back, slung over the proper left shoulder. The shabti has a back pillar and plinth.

The shabti has nine horizontal lines of impressed hieroglyphs, containing spell 6 from the Book of the Dead, the so-called shabti-spell, and mentioning the titles and the name of the owner: the hereditary prince, count, royal scribe of all offerings and priest Tjai-iniheret-imu, born to Meriptah.

For the name Tjai-iniheret-imu see Hermann Ranke, Die ägyptischen Personennamen (3 volumes, Glückstadt - Hamburg, 1935-1976), volume I, p. 387, 15. The rather peculiar name means "May Onuris seize them". The idea behind it is a wish that a god, in this case Onuris, will seize certain hostile people, whose names are not mentioned; Ranke, describing such names as having a political-historical meaning, thinks especially of the rulers of foreign countries, the enemies of Egypt (Ranke II, p. 224). See also Marianne Guentch-Ogloueff, "Noms propres imprécatoires", Bulletin de l’institut français d’archéologie orientale 40 (1941), p. 117-133, esp. p. 122, no. H2 for the name Tjai-iniheret-imu. For a series of comparable names, mentioning various gods, see Ranke, o.c. I, p. 387-388.

Provenance:
Collection of Spencer Alfred Woolward, acquired in the 1870s-1880s.

Condition:
Intact with a small amount of encrustation and some surface discolouration, as shown; lovely facial details; custom mounted.