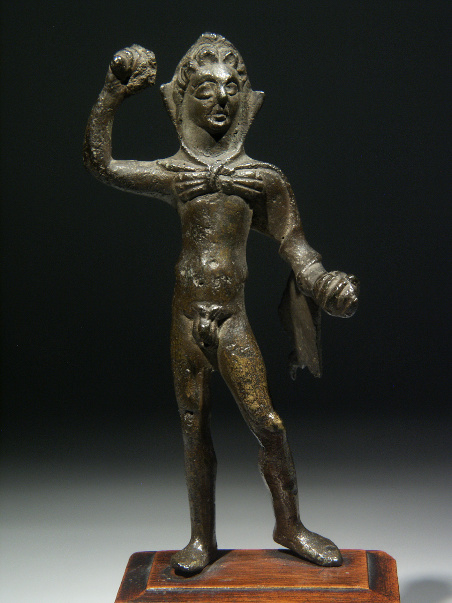 Description:
Herakles, the mythological hero, is depicted standing in contrapposto, his weight resting on his right leg while his left leg is bent. He is depicted naked, except for his cloak, made of the skin of a lion, either the Nemean lion or the lion of Cithaeron; he has used the paws of the animal to tie the skin beneath his neck, and has its head pulled up over his hair, as was described by Euripides (Herakles, line 359):

First he cleared the grove of Zeus of a lion, and put its skin upon his back, hiding his yellow hair in its fearful tawny gaping jaws.

The rest of the skin is draped over his left arm. Herakles has his right hand raised, brandishing a club, now missing. In his extended left hand we see a round object, which represents the apples of the Hesperides. The figure has a rounded head with large eyes and curly hair. The lion skin shows a carefully incised fur.

Background information:
Herakles was the son of a mortal woman called Alkmene; she was the wife of Amphytrion, but is was Zeus who was the father of Herakles. The goddess Hera, the wife of Zeus, was angry about this and tried to prevent the baby from being born.

But Alkmene did give birth to the baby, and to make things worse for Hera, she called him Herakles ("glory of Hera"). The goddess sent snakes to the baby in an attempt to kill him, but Herakles strangled them. In her next attempt Hera decided to make the life of Herakles as miserable as possible.

As an adult, Herakles married Megara, the eldest daughter of king Creon. The couple had several children, but the marriage was doomed. There are several versions of this, but according to the most popular one, written by Euripides, Hera caused Hercules to fall into a state of insanity and rage, as a result of which he shot his own wife and children with his arrows; in other versions Megara escaped.

Later Herakles saw what he had done and went to Delphi. There the oracle told Herakles to go to the city of Tiryns, where he would have to serve king Eurystheus for twelve years and perform any tasks that he might ask of him. If he would complete this assignment, he would be purified and become immortal.

The tasks which he had to perform became known as the heroic labors of Herakles. At first there were ten labors, but this number was increased to twelve as Eurystheus claimed later that two of the tasks performed by Herakles did not count, for various reasons.

The first task assigned to Herakles by Eurystheus was to kill a lion which terrorised the area of Nemea. The lion proved to be invulnerable because its skin was impervious to arrows, so Herakles went after the lion with his club, following it into a cave from which it could not escape, and strangled it with his strong arms and bare hands; another version of the myth tells us that Herakles contined to shoot arrows until he managed to kill the animal by shooting it in the mouth, which unlike its skin was unarmored.

Next Herakles tried to skin the animal with his knife, but in vain. The goddess Athena then instructed him to use one of the lion's own claws. From that moment on, Herakles wore the hide of the lion as a cloak, to protect him in battle.

There is, however, another version of the myth which says that Herakles' armor was the hide of the lion of Cithaeron:

When he was eighteen and still tending the cattle, he killed the lion of Cithaeron which was ravaging the cattle of Amphytrion and Thespius, king of Thespiae (…) After he killed the lion he wore its skin, using its head with gaping mouth as a helmet.
(Apollodorus, Gods and Heroes of the Greeks. The Library of Apollodorus. Translated with Introduction and Notes by Michael Simpson (University of Massachusetts Press, 1976), p. 91, 2.4.8-2.8.5).

The club and lion skin became the identifying attributes of Herakles. In Aristophanes' Frogs Dionysos impersonates Herakles by carrying a club and putting a lion's skin on as a cloak.

The eleventh task to de performed by Herakles was to bring Eurystheus the golden apples which were given to Zeus by Hera as a wedding gift. These apples were kept in a far away garden, where they were guarded by the Hesperides, nymphs who were daughters of Atlas or Hesperus, as well as by a never-sleeping dragon with a hundred heads, called Ladon. On his way to the gardens Herakles encountered many problems, but eventually he managed to take away the apples.

Condition:
Intact with no signs of repairs or restorations; a minuscule roughness to mainly the underside of the right foot, practically invisible since the statuette is mounted; a little pitting on the surface in places; a little corrosion around the raised right hand. Overall in excellent condition.