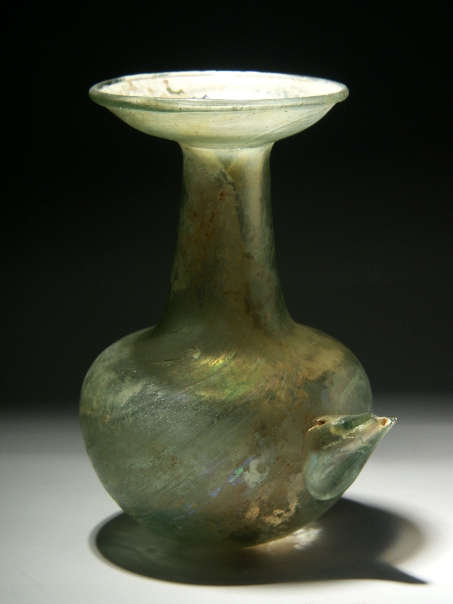 Description:
A pale green blown vessel with a squat bulbous body, a rounded base, a tall tapering cylindrical neck with a wide spreading mouth and an inwardly folded rim. There is a tapering feeding spout to one side of body.

Such glasses, which were common throughout the eastern Mediterranean region, are often called a "baby feeder", although they have also been described as a guttus, an askos, an oil flask, a blow-pipe or, generally, as a pourer flask (for an overview with further literature see Weinberg, p. 132; Lightfoot, p. 161). Many of them are a more or less bird-shaped, but other forms are known as well.

Their use remains uncertain, but the fragility of the material makes it unlikely that they were used in baths or at public functions such as sacrifices. Similarly it is hard to imagine that an infant could be fed from such a vessel, unless it was used to administer medicine (Weinberg, p. 132; Caron and Zoitopoúlou, 2008, p. 92-93, no. 82; Lightfoot, p. 161), Many consider them flasks for pouring oil into the filling holes of terracotta lamps.

Condition:
Minor damage to the tip of the spout, as shown.