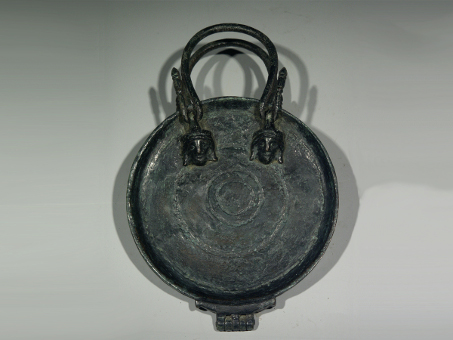 Description:
A wonderful and rare early Roman bronze mirror, dating between the 1st century B.C. and the 1st century C.E. This two-part mirror consists of two hinged circular discs, lathe-turned and with raised lips, which nest together when the mirror is closed to protect the reflecting surface. The exterior surfaces are decorated with incised concentric rings.

The interiors were polished to function as mirrors, and still retain a small amount of the original silvered surface.

Each half of the mirror has a handle on the exterior, at the side opposite the hinge. The handle on the upper disc is inserted through two looped appliqués, both shaped like theatre masks with fine facial detail and each wearing a diadem; the reverse looped attachments in raised coil design.

Background information:
The hinged mirror probably originated in fourth-century Greece and soon after made its way to Etruria. Its popularity continued in the Hellenistic and Roman periods. The object opened to expose a round mirror, usually either silvered or tinned, on the lower surface. Although polished, the upper surface probably did not serve as a second mirror but as a reflector to cast light on the viewer's face. The mirror was slightly convex, which served to diminish the reflected image somewhat, so that the viewer's head and shoulders might also be seen, rather than just the face. In the absence of full-length mirrors, this would have been quite useful. The upper surface was slightly concave, so that it did not touch the mirror surface when closed (see Berlin and Biers, 2004).

Hayes (1984, p. 188-190) distinguishes larger sized mirrors (with an average diameter of 15 cm), which mainly date to Roman Imperial periods, and smaller sized ones, which are mostly earlier.

For a bronze statuette of Amor, holding out a folding mirror to a beholder who is not depicted, but could possibly be Venus, see Thorvaldsens Museum, Kopenhagen, Denmark, inv. no. H2055.

Condition:
The mirror has been cleaned and treated for conservation; intact, with a small amount of the original silvered surface still remaining.