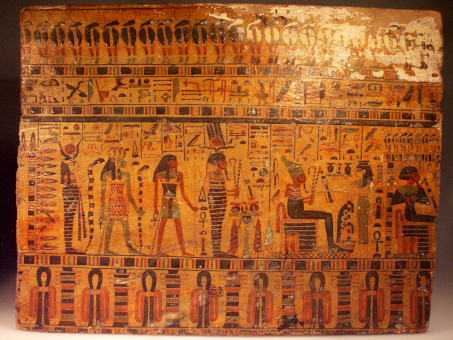 Description:
This is a magnificent panel from a wood sarcophagus, painted with highly interesting scenes and hieroglyphs in bright colours. The exterior is carefully decorated with a central band showing seven deities, two of them sitting on a throne. Among them are strange creatures as only the Egyptians knew them: one with the mummified body of a human being and the head of a cow, a sun disc between the horns and a snake before its feet, and the other one holding a snake in its hand, with a human body and the head of a lion, from which four snakes appear.

The scene is framed on the left by what appears to be a shrine or a gate, with a kheker frieze, and on the right by a shrine in which one of the gods is sitting and which has a row of cobras on its roof. An offering table, religious symbols and hieroglyphs also appear in the scene, and an accompanying hieroglyphic text runs over the whole scene.

Below this central band is a register of alternating djed pillars and tyt knots. The upper register contains another band of hieroglyphic text and a cobra frieze.

The interior side depicts a baboon-headed god, who is holding an ankh sign with both hands. He is seated before an offering table, fully laden with fruits, vegetables and bread, with two birds tied below. The scene is accompanied by seven vertical columns of hieroglyphic text, containing a prayer to the god and asking him to provide a good burial for the owner of the sarcophagus, a woman called the Lady of the House Hesimut or Ishesimut.

More information about this person can be found on another panel from her sarcophagus, which was with Charles Ede Ltd in London in the 1990s. On that panel her titles are given as the Lady of the House, the Songstress of Amun-Re, King of the Gods, the Chief of the Musical Troupe of Amun in the Second Phyle. Her husband is also mentioned: the Prophet of Amun, Amenemope.

Provenance:
Dutch private collection M.H.; with Christie’s New York, 1996; previously in the collection of an elderly US collector.

Condition:
Some loss of paint and other damage, a few stable hairline cracks in the upper layers of the surface, all as shown on the photographs; else in great condition; vibrant colours.