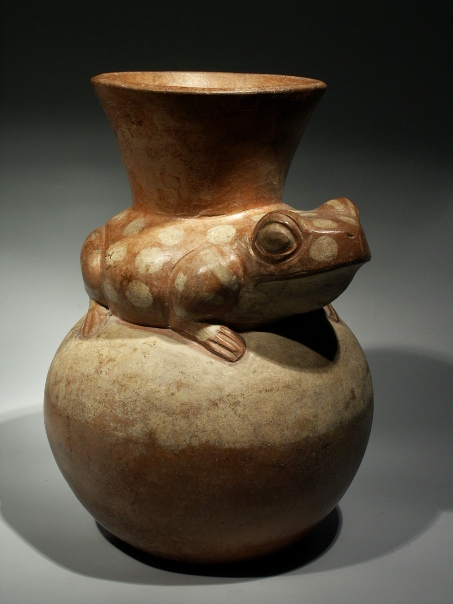 Description:
A large vessel, showing a frog / toad perched on top of a bulbous body, with a funnel-shaped spout. The frog is realistically made, with strong, muscular paws as if ready to jump, a wide mouth, and large, almond-shaped eyes. The body is decorated in a highly stylized way, with polka dots which represent the markings of the animal; similar markings can be found on other depictions of frogs (for a similarly decorated stirrup spout vessel in the shape of a toad see Berrin, p. 110, no. 43), but also on a vessel depicting a jaguar (Berrin, no. 33); both animals are more often combined in Moche depictions of fantastic creatures (see below).

Frogs occur frequently in the iconography of Moche art. As water and land animals that mutate from eggs to tadpoles to frogs, they were associated with ideas of transformation and growth (Berrin, p. 197, no. 145, gold necklace with frogs). The association with water, more specifically with the coming of rain, connected the animal also with vegetation and fertility. On the other hand, the venom from varieties that were known to be toxic was used for blowgun dart poison by many South American cultures; magical rituals and myths involving these venoms also existed. In addition to this it was known that some species were not merely poisonous but hallucinogenic (Berrin, p. 110).

In their realistic representations the Moche depicted more than one frog species (see McClelland after Duellman and Trueb), especially but not exclusively the poisonous Bufo Marinus. However, they also represented an animal that McClelland called the “botanical frog”, a composite of different animals and plants; for this botanical frog see also Turner, p. 58-59. Some of its features are feline, and it usually has a broad-banded mouth, sometimes with teeth. This frog has features of Leptodactylus Pentadactylus, an aggressive frog with a toxic nature that lives in the eastern Andean forest, but not on the north coast of Peru; still, it has been noted in many departments of Peru. McClelland remarks that the botanical frog seems clearly related to the Moche concept of agriculture, but that there are several interconnecting characteristics between the animals and the plants that comprise the botanical frog, like the toxic nature of frog and plant, their forms when underground, and the markings and behavior of both frog and feline. All of these suggest more than a simple explanation of the frog as a fertility symbol.

For other representations of frogs on Moche vessels see for example Kirsten Marie Mottl, Re-examined and Re-defined: an Exploration and Comparative Analysis of Moche Ceramic Vessels in the Milwaukee Public Museum Collections (University of Wisconsin Milwaukee, Theses and Dissertations, Paper 822, 2015), p. 95, 179-180 with fig. 68, 248, 296, 336, 355, 375.

Condition:
In excellent condition; a few miniscule chips; some surface wear and scratches; an inventory number written on the bottom. Two minuscule holes caused by taking a sample for the TL test.