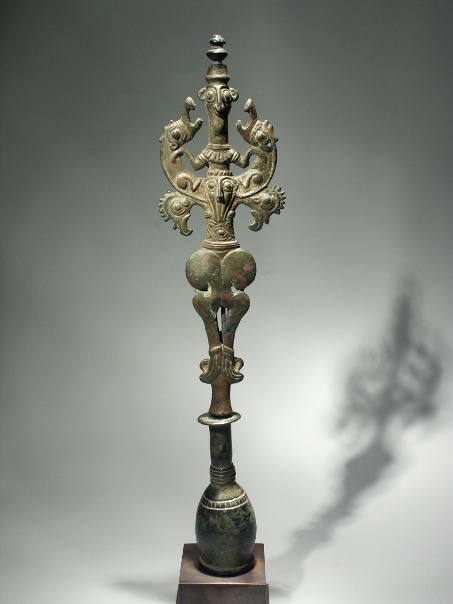 Description:
A high quality finial or standard top, cast in the form of a tube which is partly anthropomorphic and partly theriomorphic, and which has a creature on either side, not unlike the later Roman Janus-headed figures. The creature depicted has the stylized face of a human or - more likely - of a god, with an elongated nose, large ears and large round eyes; it is, as often, impossible to tell whether it is a male or female creature (see Moorey 1971, p. 153-154). On either side of the figure we see the gaping mouth of a predator or a demonic creature, the throat of which the figure is gripping with its hands. Additional animal heads can be seen on the torso and near the waist, and birds heads are projecting from the necks of the other creatures. The lower part of the body of the figure seems to be that of an animal, with crooked legs resting on what could be the stylized head of another animal.

The whole object depicts a scene of long-standing significance in ancient Near Eastern art, a scene which has often be called (confusingly, see Moorey 1971, p.154) the "Master of the Animals".

In ancient times such objects would have been joined to a standard, a pole or other support. In this case it is supported by a tapering bell-shaped stand, which may or may not be belonging.

Size:
Height circa 26,5 cm without modern base.

Condition:
In excellent condition, with a deep red-brown patina with some blue-green encrustation; consisting of three parts: stand, finial and finial top; the finial top attached to a modern pin (invisible when put together) to fix it on the head of the figure. On a custom made square metal stand, which also consists of several parts to make dismounting and mounting possible.