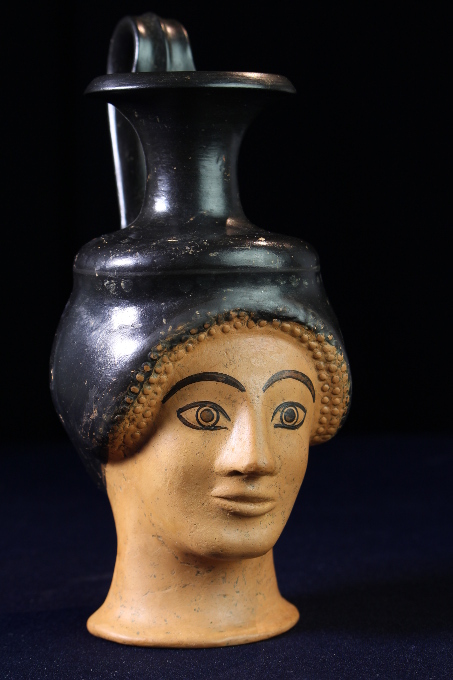 Description:
A clay oinochoe with an interesting shape: the body of the vase consists of a mould-made female head, wearing a headpiece that looks like a polos but which is in fact the rounded shoulder of the upper part of an oinochoe (shape 5B, with a round mouth and a high slung, ribbed handle). This is a rare combination, of which only very few parallels are known. It belongs to Group G, the London Group, according to John D. Beazley.

The face is finely modelled with almond shaped eyes, the pupils painted red, and with arching brows, also with added red paint. The face is framed by three rows of forelocks, articulated as nodules of raised clay. The hair is covered by a black sakkos. A wreath of ivy was painted on the headpiece.

Beazley, who studied this type of vase extensively, remarked about Group G, the London Group:

This is one of the best groups. The object, with a few exceptions, is well constructed. The features are not large or carefully worked out, but there is plenty of character, especially in the ripe mouth swelling towards the middle; and the expression is extraordinarily winsome. (John D. Beazley, "Charinos. Attic Vases in the Form of Human Heads", Journal of Hellenic Studies 49 (1929), p. 50-51).