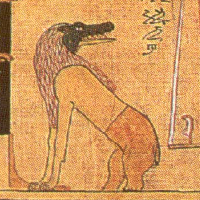 Ammut is a composite creature with (as some funerary papyri of the Book of the Dead describe and depict her, see the vignette of spell 125) the head of a crocodile, the body of a lion and the back of a hippopotamus.

Her function is to swallow the heart of any deceased who did not pass the judgement of the gods after death. The Egyptians believed that they would have to justify their deeds before a tribunal of gods, presided by Osiris and assisted by Thoth; during this the heart would also be weighed against a feather (symbol of Maat , the goddess of truth). Should the outcome be negative, the heart (or in other versions the whole deceased) would be swallowed by Ammut (her name meaning "she who swallows the dead").