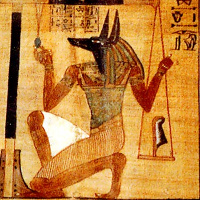 Anubis was the son of Osiris and Nephthys, according to one ancient Egyptian tradition; in other versions he is called the son of the sun god Re, and his mother can also be Bastet.

He was the god of the necropolis and of embalming, but his tasks not only included to take care of the mummy but also to destroy all enemies of Osiris, to assist during a ritual called "Opening of the Mouth" before the funeral, or in general to ensure a good burial as well as offerings. The Old Kingdom Pyramid Texts add that Anubis was responsible for counting the hearts. He also took part in the judgement of the dead, where he could be seen (vignette for spell 125 of the Book of the Dead) leading the deceased to the scales on which the heart would be weighed and subsequently towards Osiris. Because of this last task as "escort of souls" he was equated in Graeco-Roman times with Hermes.

Anubis is usually depicted as a jackal or dog, or as a man with the head of a jackal; very rarely he can be seen with a human head.