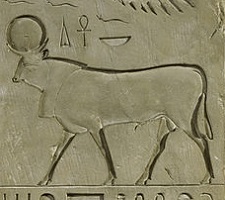 The name Apis designates a bull, which was considered sacred from at least as early as the predynastic period. The animal was linked to the Memphite god Ptah and was believed to be the ba (which translates rather incorrectly as "soul") of Ptah.

Simultaneously Apis was also linked to the god Osiris, perhaps through the connection of Osiris with Ptah, as seen in the union Ptah-Sokar-Osiris. Both Osiris and Apis were frequently mentioned in connection with their fertility, and Osiris could also be called "the great bull of the west".

Apis also had solar features, as indicated by the sun disk between his horns from the New Kingdom onwards, and by his relationship with the god Atum.

A ritual called the "Apis walk", aiming to give fertility to the fields, was known from earliest times. Another Apis walk can be seen on the foot end of many Late Period sarcophagi; this served to carry the deceased to the tomb.

The Apis bull lived in the so-called Apieion in Memphis, which was located near the temple of Ptah. Only one Apis bull at a time was worshipped in Egypt. After the bull died, it was mummified and buried in the Serapeum in Saqqara. Part of the mummification ritual for the Apis bulls has been preserved in a Demotic papyrus. The choice of a new Apis bull was determined by certain physical characteristics, the most important of which was a white triangle on the forehead. Also certain black markings on the body played a role; one of these, according to Herodotus, had to be in the shape of an eagle.

The above-mentioned relationship between Apis and Osiris was so close that in Graeco-Roman times a new god was created, Sarapis (= Osir-Apis).