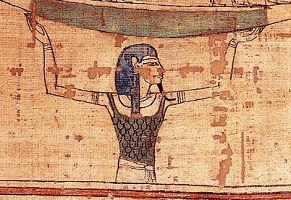 Nun was the god of the primeval waters, the chaotic and inert mass, shapeless in itself but from which everything was created. He was a member of the Ogdoad of Hermopolis, with Naunet as his partner.

Creation myths tell that the first island, also called the primeval hill, rose out of these waters. The creator god Atum, tired of swimming, set foot on this island and started creation.

When during the annual flood of the Nile the land gradually reappeared, as the waters lowered, the Egyptians saw a parallel with the "first time". They believed that the earth was floating on the waters of Nun, that the water of the Nile, entering the earth through two holes in the surface, came directly out of Nun and that is was therefore very fertile and life-bringing.

Nun was portrayed as a man (with the head of a frog when he was depicted as a member of the Ogdoad). He could have two plumes on his head. In some images he is lifting up the sun bark.