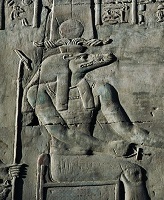 Sobek (also Sebek or, in Greek, Suchos) was a crocodile god. Egypt depended on the waters of the Nile, for food as well as for travelling. But in these waters there were many crocodiles. It is only logical that such a dangerous creature was made into a god, so that people could pray to him, asking him for protection against crocodiles.

But Sobek was more than just a protector: being associated with the fertile waters of the Nile he also stood for the rich produce of the river and for its fertility. Therefore he was also believed in some traditions to have been the creator god who first came out of the water to start creation. In this role he could be associated with the sun god Re and become Sobek-Re.

Cult centres were to be found all over Egypt, usually near the water, as crocodiles were everywhere. One famous cult place in particular was Kom Ombo (where the double temple was dedicated to Haroeris as well). The cult of Sobek flourished especially in the Fayyum, and one of the towns there, Arsinoe, was actually called Crocodilopolis ("“Crocodile Town") by the Greeks. Apart from these centres there were temples throughout the land which had a sacred lake with crocodiles in it. To these the best cuts of meat were given, and some animals became rather tame.

Sobek was usually depicted as a man with the head of a crocodile, or entirely as a crocodile. Sometimes he was given attributes, like an uraeus or the sign of life; as Sobek-Re he could have a sun disc on his head.