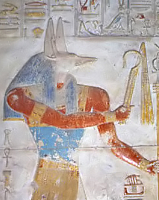 Wepwawet (also Wepwaut or Upuaut) was a god in the form of a jackal or similar canine. His name, meaning "He Who Opens the Ways", indicates that Wepwawet came first. This applies not only to his standard during processions, but also to his presence in other situations. During the so-called Osiris Mysteries in Abydos there was a procession of Wepwawet on the first day, followed on the next day by the procession of Osiris. Connected to the procession of Wepwawet was a mock battle, during which the enemies of Osiris were defeated. This may have to do with the origins of Wepwawet: he is believed to have been a god of war (the mace or other objects with which he is sometimes depicted refer to this) who "opened" (cleared) the way for the army. In a similar way he was supposed to clear the way to the necropolis, and even to open the ways for the deceased during his travels through the underworld. The god also accompanied the king, when he travelled through other countries as a conqueror.

The main cult centre of Wepwawet was Asyut, called Lykopolis ("Town of the Wolf ") by the Greeks. But also in Abydos there was a cult, linked to that of Osiris.

Wepwawet is usually portrayed as a jackal, often on a standard; sometimes he is shown as a man with a jackal's head.