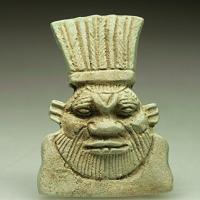 The god who is usually called Bes was in fact the personification of a whole group of very similar gods, whose characteristics are too much muddled for us to be able to differentiate them and who, therefore, are all commonly referred to as Bes.

Bes is a god with a remarkable appearance; his face, surrounded by a lion’s mane and with his tongue often sticking out of his mouth, is quite gruesome, and so is his body which is that of a dwarf, with short crooked legs and usually a tail; normally he is wearing an animal skin and a headdress with feathers. Often he is holding one or more knives or snakes.

His main task is to give protection, especially in circumstances where dangers are lurking, such as during childbirth; so-called magical knives, used in the Middle Kingdom during rituals surrounding childbirth, depict Bes and other protective creatures; similarly, in later periods, Bes is present in the so-called birth house (mammisi) in temples.

But not only during special moments (rites de passage) all kinds of dangers were lurking, they were also feared in daily life. During the night people were sleeping, unaware of what was happening around them; to protect them, representations of Bes (or similar gods, like Taweret) were put on furniture like beds and headrests. Depictions of the god were also worn as amulets as a general protection against evil.

A completely different aspect of the god can be seen on so-called magical stelae. On these the young Horus is shown triumphing over forces of evil, represented by snakes, crocodiles and a gazelle. Almost all of these stelae also show the face of Bes above Horus; from the accompanying texts we learn that Bes is here regarded as the old sun god, who is rejuvenated in the (solar) child.