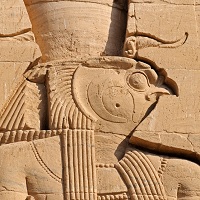 Horus is well-known as a falcon god, but in fact his name (meaning "the one who is distant / above", referring to the image of a falcon, high in the sky, in his role as a sky god) is a collective name for several gods.

One of these is Horus the Elder (Haroeris, Her wer in Egyptian) who, according to ancient texts, was a son of the sky goddess Nut. He was born on the second of the five extra days that were added to the year; he was the brother of Osiris, Isis, Nephthys and Seth. The sun and the moon were believed to be his eyes.

A completely different Horus is the son of Osiris and Isis (also known as Harsiese, Greek for Her sa Aset, Horus, the son of Isis).

For the ancient Egyptians these two Horus gods were associated; in some traditions it was Harsiese who was fighting with his uncle Seth for the throne of Osiris, whereas in other traditions the two fighting gods belonged to the same generation, which means that in this tradition they were brothers and we are dealing with Haroeris.

Yet another Horus was Harpokrates (Greek for Her pa khered, Horus the Child). He was in some ways overlapping with Harsiese, but the latter was not necessarily always a child, whereas Harpokrates did stress the aspect of being young.

Also known was a Horus "who protects his father" (Harendotes, Her nedj itef in Egyptian), which, like Harpokrates, was in part the same as Harsiese (or rather an aspect of him), being the son of Osiris whom he was helping and protecting.

There was also a god called Harsomtus(Greek for Her sema tawy, Horus who unites the two lands).

Especially related to the sun god Re was Harakhte, "Horus of the Horizon" (Her akhty), who was associated with the eastern horizon.

"Horus in the Horizon" (Her em akhet or Harmakhis) was Horus as seen in the sphinx of Giza.

Several Horus gods were usually referred to by the name of their main cult centre: Horus of Letopolis, Horus of Hierakonpolis, and above all Horus of Edfu, who is mentioned on numerous monuments.

The reigning king was believed to be the personification of Horus on earth and his reign was the actualisation of the reign of Horus on earth after the death of Osiris. The king always carried five royal names, one of which was the so-called Horus name.

Horus was usually shown as a falcon or as a man with the head of a falcon; as Harpokrates he was mostly portrayed as a naked boy with the sidelock of youth and with his finger to his mouth.

A well-known amulet is the so-called eye of Horus. This refers to an episode from the story of the battle between Horus and Seth, during which the former lost one of his eyes. This was later given back to him and healed with the help of Thoth; as a result his complete, undamaged eye (wedjat in Egyptian) was considered the prototype of one of the most powerful amulets.