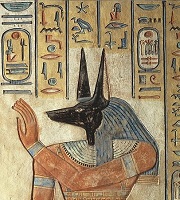 Duamutef is one of the children of Horus. Like the other children he had the task to protect part of the internal organs of the deceased, which were removed from the body during mummification and which were stored in four so-called canopic jars. Duamutef was especially in charge of the protection of the stomach, and spells inform us that he himself was helped or protected during this task by the goddess Neith.

Duamutef is depicted as a man, or as a man with a jackal’s head. The canopic jar containing the stomach usually has a lid showing the head of Duamutef.