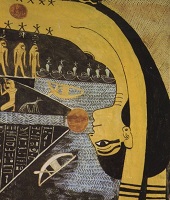 Nut was the goddess of the sky and also a funerary goddess.

The Egyptians believed that she stood on hands and feet at the corners of the earth. In the morning she gave birth to the sun god in the east; this god would then travel along her body towards the west, where Nut would swallow him in the evening. During the night the sun travelled back to the east inside her body, to be born again the next morning.

As every Egyptian hoped to join the sun god after death, to travel with him and to be reborn every day, the tomb or more specifically the sarcophagus (from which the deceased hoped to reappear) was identified with Nut. Often Nut is depicted on the inside of coffin lids, where she is literally above the deceased like the sky, and in royal tombs in the Valley of the Kings the journey of the sun through Nut was depicted on the ceiling.

Nut was the daughter of Shu and Tefnut and the partner of Geb. Her children were Osiris, Isis, Nephthys and Seth, and in some cases Horus (who, in fact, was her grandson. However, a story told by Plutarch informs us that Helios (the Greek name for the sun god Re) forbade Rhea (= Nut) to give birth on any day of the calendar year; Hermes (= Thoth) then added five extra days to the year, so that Rhea could give birth to her five children, one of which was Apollo (= Horus)).

Nut is usually depicted as a woman, often bending over the earth; in some cases she has the shape of a cow, standing over the earth. Her father Shu can be shown below her, lifting her up to separate her from Geb. Stars and the sun disk can decorate her body, and sometimes she is shown swallowing the sun disk. In addition she is also depicted as a tree goddess, giving water or food to the deceased. In some cases she has wings, giving both cool air and protection.