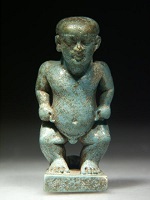 Pataikos was a god (or perhaps a member of a whole group of similarly looking gods) who gave protection. He is mostly known from amulets.

Pataikos is generally depicted as a dwarf with short crooked legs and a bald head or, less frequently, the head of a falcon. In many cases he is shown standing on crocodiles (a symbol of his triumph over them) and having snakes and other dangerous animals in his hands. In many ways he resembles the god Harpokrates on magical stelae. An extra element which is sometimes added is a scarab on top of his head.

Pataikos was also associated with Ptah and Ptah-Sokar. The name Pataikos goes back to Herodotus, the Greek writer who visited Egypt in the 5th century BC. He tells us that a statue of the god Ptah was kept in the temple of Memphis, which had the shape of a dwarf and which reminded him of a statuette in similar shape in Phoenicia. He also informs us that the god represented as a dwarf was regarded as the son of Ptah.

Pataikos is also depicted together with Sekhmet or Nefertem, both gods who were related to Ptah in the triad of Memphis.