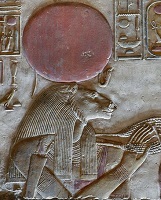 Sekhmet was a lion goddess, associated with battle and war, and a solar deity. Her name means "Powerful One", which not only had to do with the character of a lion, but also illustrates her task in protecting the king and destroying his enemies. She was often associated with Mut, Wadjet, Tefnut and Hathor, who also had a fierce side, and with the cat Bastet who represented her softer side; a text in Dendera speaks of "raging like Sekhmet and friendly like Bastet".

Another illustration of her fierceness is the fact that she could destroy even Egypt itself, by bringing illness and plague, and at the same time was believed to be able to cure whoever was ill. Priests of Sekhmet were often also doctors.

When destructive against Egypt she had to be pacified by rituals and offerings; to receive these, many statues of the goddess were erected; more than 700 are known from one temple from the time of Amenhotep III alone.

Sekhmet was especially associated with Memphis, where she was the wife of Ptah and the mother of Nefertem in the triad of Memphis. She was also the mother of the lion god Mahes.

Sekhmet is usually depicted as a woman with the head of a lion, or as a lioness; often she has the solar disk with an uraeus on her head.